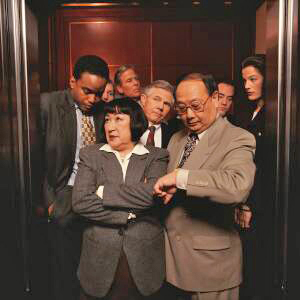 Do you use elevators in the course of your normal day? If not, you may not know about elevator etiquette. Or even realize there is such a thing as elevator etiquette. I use elevators a lot, usually at whatever hotel I may be staying in while traveling because I always request that my room is on a high (if not the highest) floor of the hotel, and sometimes in the office in which I’m working. And yes, I should be using the stairs as much as possible but I can’t always work up the initiative to do so at the end of a long day.

In a couple of weeks, Cindy and I will be flying into Seattle to spend some time exploring the great northwest together, celebrate our wedding anniversary, and visit with our two youngest grandchildren. Oh, and their parents 🙂

So this article from Seattle’s newspaper, The Stranger, caught my eye. The reporter puts the spotlight on a sign in the elevator they use where they live that is titled “How to Practice Good Elevator Etiquette” and it lists seven things that folks in an elevator should observe in order to successfully demonstrate elevator etiquette.

Speak Politely – Yes and no. I’ll say “Good morning” or “Good afternoon/evening”, but that is about as far as I want to go in conversation with strangers (and sometimes even with people I know, lol).  I’m not into a full-blown conversation with folks I don’t know, but I will do my best to respond with polite grunts to their attempts of word exchange and just hope they get off the elevator as soon as possible.

But, while we’re on the subject… 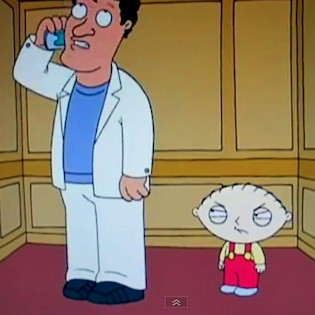 Since I’m on the road for business so often, Cindy and I almost always talk on the phone at least twice a day; in the morning when I leave the hotel to drive to the office and sometimes our evening call is also when I’m arriving back at the hotel. I use my Bluetooth earpiece during our calls, so I will usually say to her, “I’m getting on the elevator” and she knows that while I’m in the elevator car I won’t talk to her if someone else is in there as well. I happen to feel that it’s a bit rude for someone to carry on a conversation by phone in any closed area where others are forced to listen to your one side of a conversation. I also have no desire for strangers to hear my conversation, even if it is only my side.

So Cindy is a bit…mischievous. Knowing that I won’t respond and don’t want to respond to what she is saying when I’m in an elevator with other people, she will say all kinds of “suggestive” things she knows they won’t hear (and that I can’t write here), hoping that I will laugh or react in some manner, even if it’s just blushing.

Yeah, those are the kinds of things I have to put up with.

Stand to the right. While waiting for the elevator, stand away from the doors – Yes. I think it’s incredibly rude for someone to try and get on the elevator before the occupants can get off. Just wait. You’re not going to get moving any faster by jumping on before people can get off.

Be the button pusher – Yes, if I’m near the panel, I’ll ask people, “What floor?” and push the button. Then I hope that they don’t misconstrue my politeness as an invitation to engage in conversation, lol.

Consider taking the stairs – Yes and no. Most of the time, my hands are full carrying things and the stairs would be problematic as well as just plain tiring. If not, I try to take the stairs but mostly for my health’s sake and not to practice elevator etiquette toward other riders. 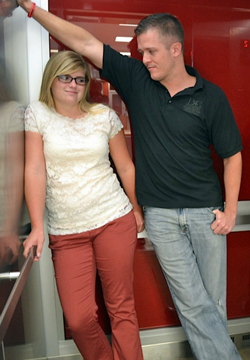 Move to the back – Yes, though most of the time it will be after I see that someone else is going to get on. And, if it’s just a woman and myself in the car, I will purposely stay to the far side and even with her (not like this guy) or just in front of her so she can always see me. I try to do my best to be cognizant of how uncomfortable it would make a woman to be alone in an elevator car with someone when she can’t see them because they are behind her. I don’t like anyone to be behind ME either. So I think that’s another aspect of elevator etiquette.

Think about odors – Good gosh, yes. Most of the time when I’m in an elevator it’s because I’m on my way to work and so I’m freshly showered, or on my way back from work that, while mentally exhausting at times, does not manifest itself in sweaty body odor. If I work up the initiative to go down and work out in the gym, I always take the stairs, both for the health benefits and in order not to offend other elevator passengers. 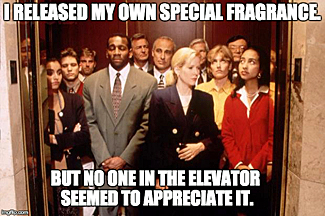 My pet peeve about odors in an elevator? People who seem to bathe in perfume or cologne. My god, the strong, sometimes pungent odors of someone’s chosen body scent will give me an immediate headache that I can’t shake for the rest of the day. Be considerate and minimize or at least moderate the use and application of that stuff, please!

I think it might be a good idea to post this list in every elevator, not just the one in Seattle, and give everyone a good idea of how to practice elevator etiquette.