The Thoughtfulness of a Sister-in-Law

Last Friday, while I was still in Florida, Cindy and I drove down to Clearwater to take my brother and his family to lunch for his birthday. It was the first time we’d been together for his birthday since we were kids. But I’ll write another post about that later.

This post is about my wonderful sister-in-law, Pia. And the kind of thoughtfulness that can only be defined by the deed.

For many, many  Christmases, until a couple of years before she passed away in 2010, our mom would always make Mark and I a fruitcake. I could never really understand all the jokes people made about the inedible qualities of a fruitcake until I tried a Claxton fruitcake one year and found getting down even one bite of it to be a struggle. If that was what people thought a fruitcake tasted like, then I could understand the jokes. My mom’s fruitcake tasted good and I would enjoy a slice as dessert after meals (and sometimes as a mid-day snack) for a couple of weeks after Christmas. The only drawback I could ever find was that sometimes, especially as she got older and making one became harder, the fruitcake would be a tad dry. But that was easy to overlook because, having observed her making them when I was living at home as a child, I knew the love that went into each one. That love made up for any dryness that might happen.

Since her illness and subsequent passing, I had resigned myself to the truth that I would never have another fruitcake like that again.

So you can probably imagine my surprise when, while we exchanging some gifts as we talked and laughed and visited, Pia said she had something for me. She said she knew how much Mark and I enjoyed mom’s fruitcakes and that she had asked my mom for her recipe and that mom had given it to her years ago. But that she had never used it because, while she loves to cook, she never considered herself a baker. However, this year she had made one for Mark and one for me. She also did something my Baptist mother would have never done; she soaked it in rum (which, believe me, eliminated ANY dryness, lol). She gave it to me to bring back to Orlando and made me promise that I would tell her the truth about whether it was any good or not once I had a chance to taste it. 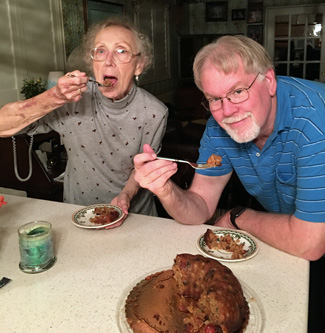 I got my first taste of it Saturday night when, as you can see from the photo, I shared some with my mother-in-law.

So Pia, here’s the truth.

That was a damn good fruitcake! And it was made all the better and tastier because of your thoughtfulness in wanting to give two boys a reminder of how much that fruitcake meant each Christmas. Thank you.

I wrapped up half of it (as much as I could fit in my carryon) in aluminum foil and placed it inside a gallon ziploc bag, so I could bring it to South Dakota with me to enjoy for a few more days. The rest I left for others to enjoy in Orlando.

And so the visit and the lunch and the gift-exchanging and the sheer joy and happiness of getting to spend my brother’s birthday with him were made even more touching because of the thoughtfulness of a sister-in-law.
Now, if you’ll excuse me, I have to go have another slice of that fruitcake. 🙂

One thought on “ : The Thoughtfulness of a Sister-in-Law”