Happy 18th Wedding Anniversary To Us! 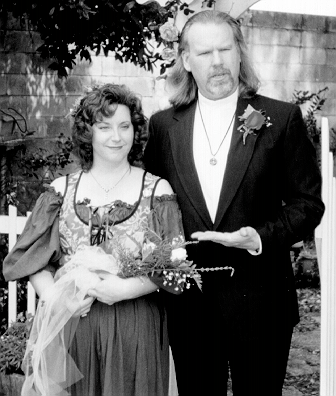 Man, I have gone downhill in a hurry these past 18 years, but Cindy is still as beautiful as she was the day we married.

As I mentioned a few days ago on Throwback Thursday, it was 18 years ago today that Cindy and I were married in the presence of a few friends and family members in the backyard garden of her parents’ home. It was Easter Sunday and though we don’t observe that religious holiday, our wedding did definitely signify the new beginnings that Spring represents, for both of us.

I look back and marvel that it has been that long because it seems in so many ways like it was only a short time ago.

We have two songs which came out during the 6 months before we were married that we claimed as “our songs” and had played throughout our wedding ceremony.

The video below, “When You Love A Woman”, by Journey is one of the songs we had played at our wedding. It had just come out shortly after we met 6 months earlier in 1996 and we slow-danced to it SO many times in the old JD Penguins’ lounge where we met on Halloween night, 1996.

“When you love a woman, you see your world inside her eyes.”

The song “I Finally Found Someone” by Bryan Adams and Barbra Streisand was part of the soundtrack for the movie “The Mirror Has Two Faces” which hit theaters on November 15, 1996, 2 weeks after we met. This was also a song we danced to more times than I can count and had played on the day of our nuptials as we said our vows.

Today we’re driving over to Daytona for a couple of days and nights at a hotel on the seashore so Cindy can awaken to some sunrises on the beach, something she just loves to do and experience.