…that on this date in 1840, the first official adhesive postage stamp was issued in Great Britain? 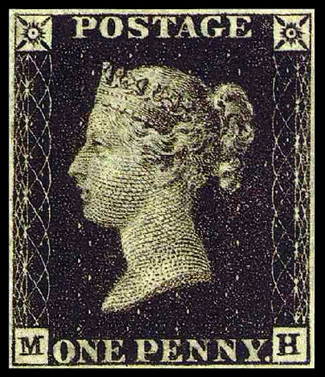 Up until the late 1830s, the recipient of the letter was supposed to pay upon delivery. Rates were inconsistent: postage was calculated based on number of sheets of paper and the distance from sender to recipient. The rules were complicated and postage was expensive, and people often refused to pay, costing the government a lot of money.

A schoolmaster named Rowland Hill developed a new system that established uniform postal rates based on weight. The sender would pay with stamps that cost a penny each. The design of the first stamp was an engraved profile of Queen Victoria on a black background, called the Penny Black. Since Britain was the first country to use prepaid postage stamps, they have never printed the name of their country on their stamps, just a portrait of the reigning monarch.
Thanks to The Writer’s Almanac for the above.