Just a collection of this and that from recent things I’ve read, seen, or experienced.

You know, I just can’t find it in my heart or head to blame Mr. Randall Margraves for his actions in a Michigan courtroom today. I fully understand, as I believe Mr. Margraves does as well, that this is not the way our justice system works, but I can’t say with conviction that I would not have wanted to do the very same thing. 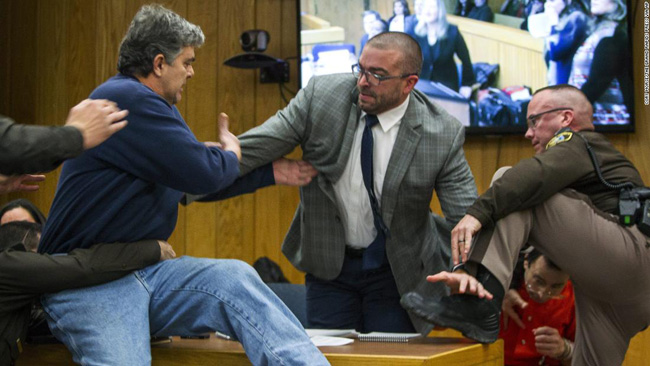 Did Robert Wagner kill Natalie Wood? I well remember when Ms. Wood drowned in 1981. Even before the days of social media that centered on Hollywood, the suspicious drowning of one of Tinsel Town’s best and most beautiful actresses made the news programs across the country (especially the nascent CNN 24- hour news network) fill our TV screens, newspapers, and Enquirer-type rags with news of the death and then conjecture that her husband, Robert Wagner, had thrown her overboard from their boat.

And, that’s what we’re conditioned to think. Crime thriller books and criminal procedure TV shows have taught us that the first person you look at is the spouse or person closest to the deceased. But those books and TV shows didn’t make that up by themselves. Historically, law enforcement has shown that indeed, that is where you will most likely find your murderer.

So, did Robert Wagner kill Natalie Wood? I don’t know, and a little over 36 years later I don’t see how the justice system will be able to prove Mr. Wagner murdered Ms. Wood, outside of an until-now-silent eyewitness or a confession from Mr. Wagner.

Are you an introvert or an extrovert, or somewhere in between? I was a shy child. I remember when I was eight or nine years old running home from a friend’s birthday party because I did not know anyone there. I just dropped the gift off and ran back down the street to my house. And even though I took pains in my late teens and early twenties to become more outgoing and engage in a fair amount of public speaking, to the point that today I can stand up in a room full of strangers and speak with no more than the usual butterflies in my stomach that almost all public speakers get, I still prefer my own company or that of those close to me (which ain’t many, lol).

I like the quote from Susan Cain, in this article about introversion and extroversion from thoughtco.com, “We’re not anti-social; we’re differently social. I can’t live without my family and close friends, but I also crave solitude.”

However, come to think of it, I might actually BE anti-social, lol.

I’m really looking forward to the Andre The Giant documentary coming out in April from HBO. I grew up reading about him in wrestling magazines and watching the Eighth Wonder of the World perform in various wrestling promotions across the country until he landed in the WWE.

Those who never saw him in a wrestling ring will more than likely remember him as Fezzik in “The Princess Bride”.

This production is long overdue and should be fascinating as well as heartbreaking to fans.

Here’s the official trailer for the upcoming documentary.