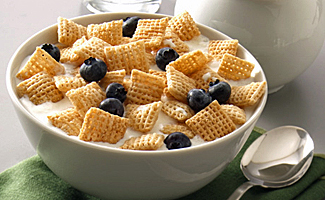 The first cold breakfast cereal was invented back in 1863 and was known as Granula. But Granula never really became popular, mostly because it wasn’t truly “ready to eat” since it was necessary to soften the heavy bran and graham nuggets by soaking them overnight so they could be eaten in the morning.

I especially loved the time over the summer when my family would go visit my father’s sister and her husband. Aunt Louise worked for the IGA grocery store in the next town over, so I guess she got discounts on food because there was never a shortage of something either being cooked or leftover from an earlier meal in her home.

One of my favorite things to do was to open the door to her walk-in pantry, step inside,  turn on the light and find 20 to 30 different boxes of cereal lined up on the shelves and hearing Aunt Louise say from the kitchen, “Pick the kind you want this morning and bring it in here.” For a 7 to 11-year-old kid, seeing all those brightly colored boxes of different cereals was almost like standing in a candy store. There were boxes of Alpha-Bits, Sugar Crisp, Honeycomb, Corn Flakes, Frosted Flakes (“They’re Grrrreeaatt!”), Rice Krispies (“Snap, Crackle, Pop!”), Fruit Loops, Cocoa Krispies, Apple Jacks, Sugar Smacks, Sugar Pops, Raisin Bran, Wheaties, Cheerios, Kix, Trix, Quisp, Quake, Puffa Puffa Rice, Grape Nuts, Special K (YUCK!), to name a few. 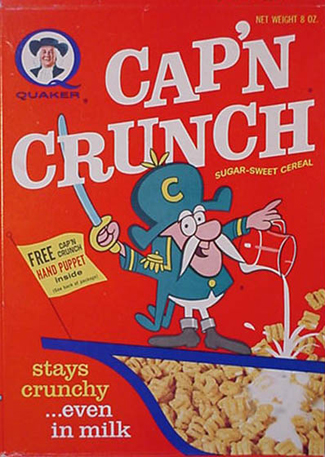 I generally gravitated toward any of the sweetened cereals, especially Frosted Flakes, Trix, Sugar Pops and Alpha-Bits, but my favorite of all-time was a cereal introduced in 1963 called Cap’n Crunch! Its claim to fame was it didn’t get soggy in milk as fast as most cereals of the day did. I could sit engrossed in whatever morning show I was watching before school (Captain Kangaroo) or cartoons I was watching on Saturday morning and not worry that my cereal was getting soggier than a cat in a rainstorm.

Cap’n Crunch’s full name is Horatio Magellan Crunch. He was born on Crunch Island in the Sea of Milk.

Later a Peanut Butter Cap’n Crunch cereal was brought out, but I really couldn’t stomach that stuff, and I like peanut butter. That “cereal” just tasted nasty. And I never tried Crunch Berries or Sprinkled Donut Crunch.

Here’s a Cap’n Crunch commercial I remember seeing when I was 10 or 11.

What was, or is, your favorite cereal?

One thought on “ : National Cereal Day”