Pi is a mathematical constant, defined as the ratio of a circle’s circumference to its diameter, commonly approximated as 3.14159, though the actual number is infinitesimal. Here’s how the Dr. Math site describes pi:

If you write pi down in decimal form, the numbers to the right of the 0 never repeat in a pattern. Some infinite decimals do have patterns – for instance, the infinite decimal .3333333… has all 3’s to the right of the decimal point, and in the number .123456789123456789123456789… the sequence 123456789 is repeated. However, although many mathematicians have tried to find it, no repeating pattern for pi has been discovered – in fact, in 1768 Johann Lambert proved that there cannot be any such repeating pattern. 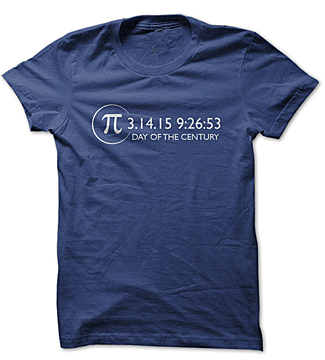 An even more detailed Pi Day T-shirt which includes the next 5 numbers, narrowing it down to the hour, minutes and seconds of the day.

And now my brain is mush because math is NOT my strong suit.

So, Happy Pi Day! May your day be roundly and irrationally enjoyed.