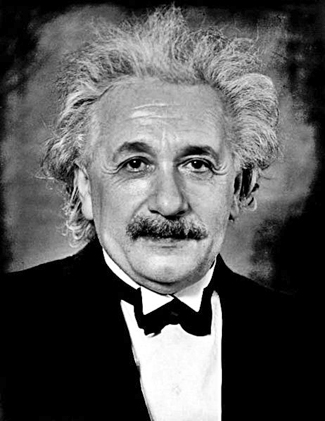 You know the question, “If you could meet one person from the past, who would it be?” that is asked on some psychological tests or sometimes just out of general curiosity? My answer, since I was a young teenager, has always been Albert Einstein! Now, math was my WORST subject in school and obviously my intellect is never going to rise to a level sufficient to discuss great theoretical questions about the universe with this giant in the field of physics, but to just sit in the presence of and exchange a few casual words with a man I have admired since first learning about him would be one of the greatest experiences of my life.

Dr. Einstein was born on this date in 1879 in Germany and is recognized as one of the foremost theoretical physicists of all time. In October 1933 he accepted a position at the Institute for Advanced Study (in Princeton, New Jersey), and in 1935 he made the decision to remain permanently in the United States and apply for citizenship, remaining at the Institute for Advanced Study until his death in 1955.

While working in New Jersey last June, I spent a Saturday enjoying a walking tour of Princeton (the town and the university campus) using Princeton Tour Company (I highly recommend them if you want an enjoyable, informative and fun walking tour of Princeton). During the tour we walked past the first home that Einstein lived in and the second home he lived in, while living and working in Princeton for more than 20 years. I would have loved to have walked through each of those homes, but that is not possible.

The town of Princeton hosts numerous events in a combined celebration of Pi Day (which is also observed on March 14th) and Albert Einstein’s birthday. In addition to pie eating and recitation contests, there is an annual Einstein look-alike contest.

“The difference between stupidity and genius is that genius has its limits.” – Albert Einstein