What a wonderful time Cindy and I had with our good friends Kirk and Laura yesterday out at the Disney Animal Kingdom! CIndy and I had not been to Animal Kingdom in at least 4 ½ years, so it was nice to revisit one of our favorite Disney parks. 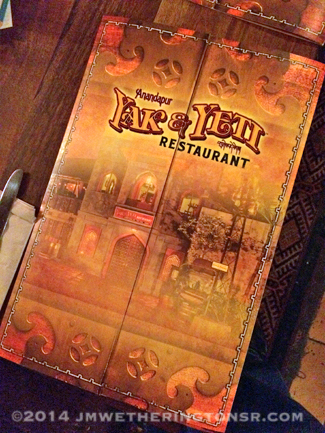 Cindy and I had never dined at Yak & Yeti before, but I think it’s a restaurant we would return to the next time we’re at Animal Kingdom. The four of us shared a Dim Sum Basket, and then Cindy and I shared a plate of Sweet and Sour Chicken with Brown Rice, while Kirk and Laura enjoyed Maple Tamarind Chicken with Coconut Rice and Crispy Mahi Mahi with Jasmine Rice, respectively. 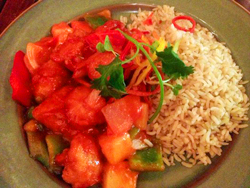 I would say that, aside from Sweet and Sour Chicken I had in New York’s Chinatown twenty-something years ago with my brother, his wife and her brother, this was the best I have eaten in my life. The chicken was cooked perfectly and the sweet and sour glaze was just the right mixture and consistency. Not the icky sweet glop you get in your usual Chinese Buffet restaurant. For dessert, Kirk, Laura and I had the Mango pie while Cindy enjoyed some chocolate cake. The Mango pie was the driving force behind Kirk’s suggestion that we dine at Yak & Yeti’s and I could see why. Creamy, with almost the same texture as Key Lime pie, but with the sweet/tangy flavor of a ripe mango, on top of a shortbread cookie-style crust. As my dad used to say when he liked the taste of something, “It’ll make your tongue knock your teeth out trying to get some more of it.”

An hour and a half later we left Yak & Yeti to walk off our full stomachs. We passed the Everest Expedition ride and listened to people screaming as they came face to face with the Yeti on the ride’s tracks and plummeted down the rollercoaster’s steep incline. 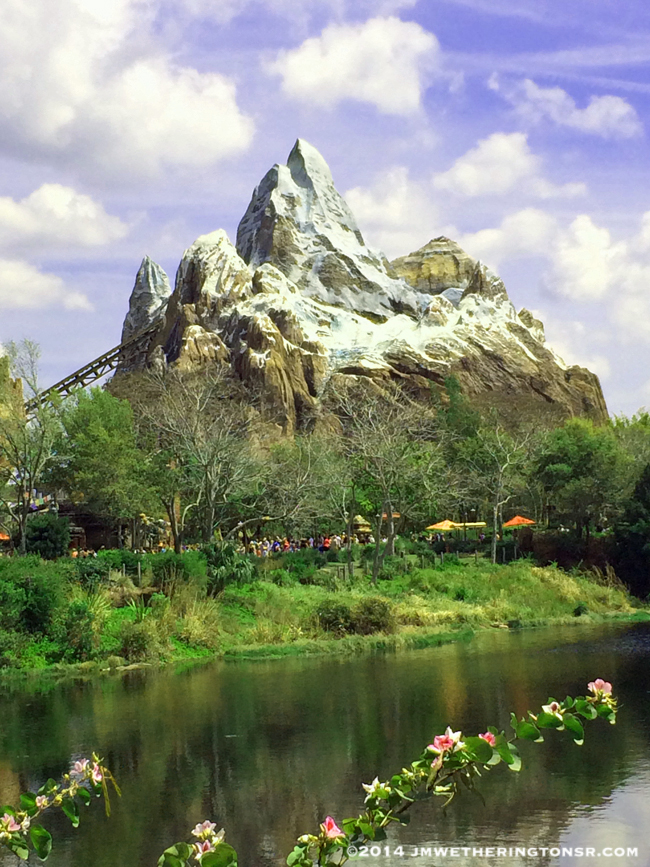 A leisurely stroll through the Conservation Station area where you can view so many of the animals in their natural habitat was relaxing and enjoyable, even as the afternoon was beginning to warm up a bit. Cindy always loves seeing the meerkats and I like visiting my relatives in the gorilla area. Watching the fish, both from above and below ground, was fun too. 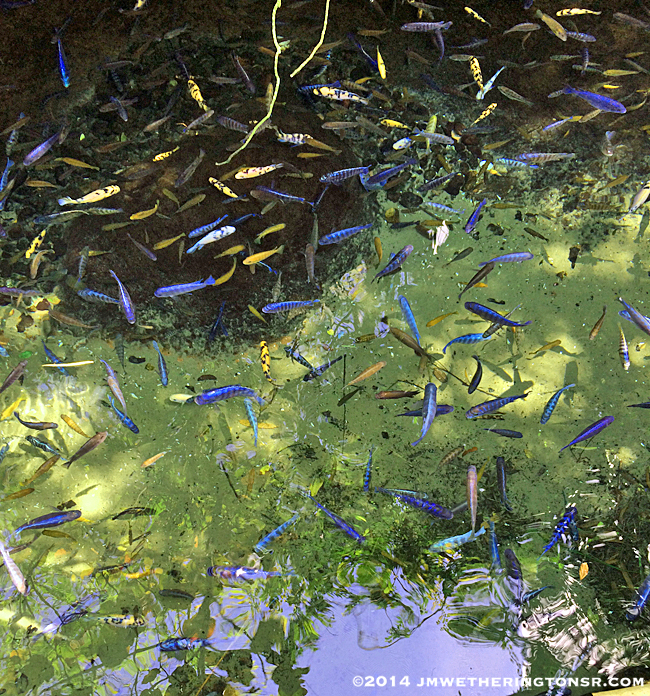 A view of the colorful fish from above. 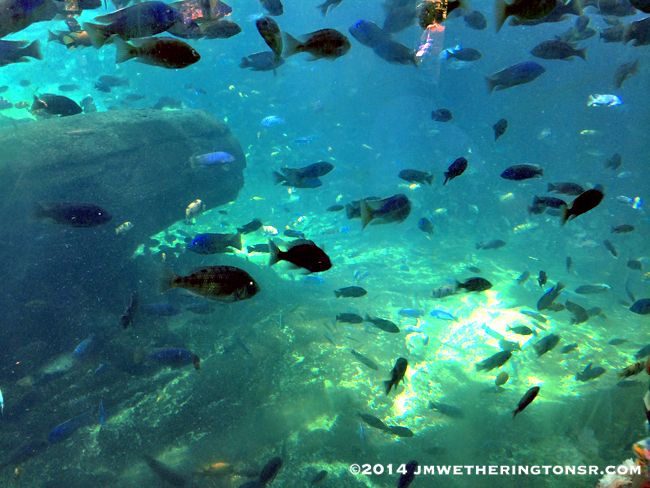 And the fish through the glass viewing area below ground level.

We eventually ended up at DinoLand USA. I had not been on the Dinosaur ride since shortly after Animal Kingdom opened back in 1998 and we all thought it might be fun to travel back in time 65 million years. 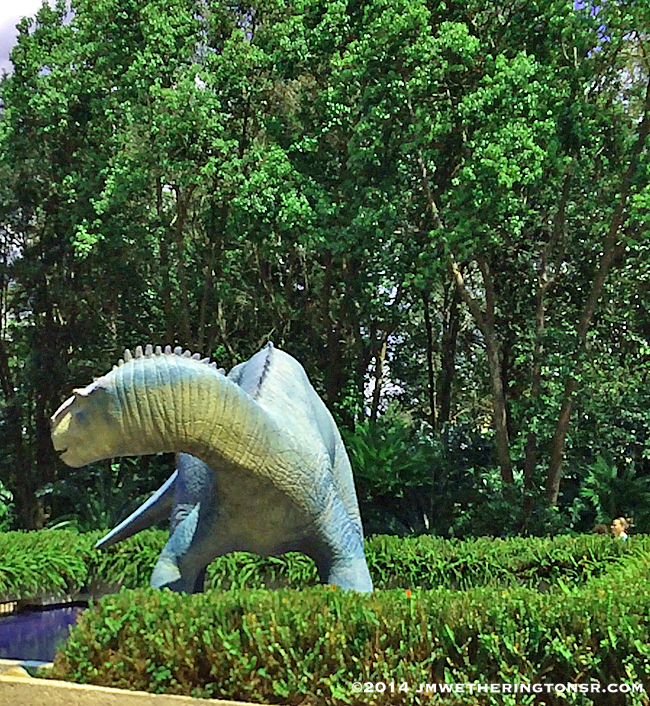 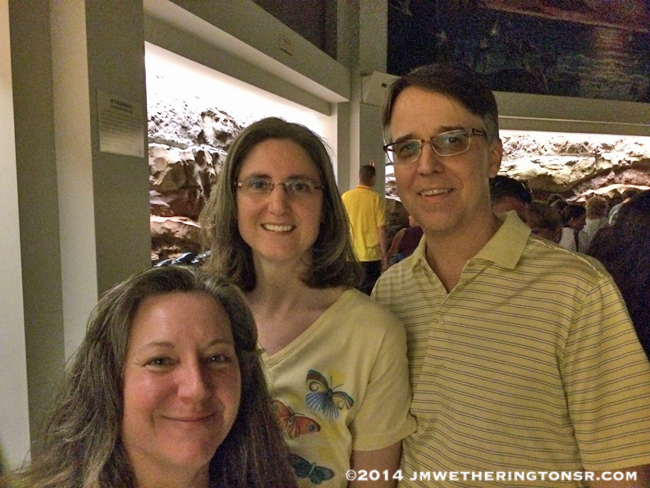 From left to right; Cindy, Laura and Kirk, as we prepare to board the Dinosaur Ride and travel to the past. Everyone’s all smiles NOW… 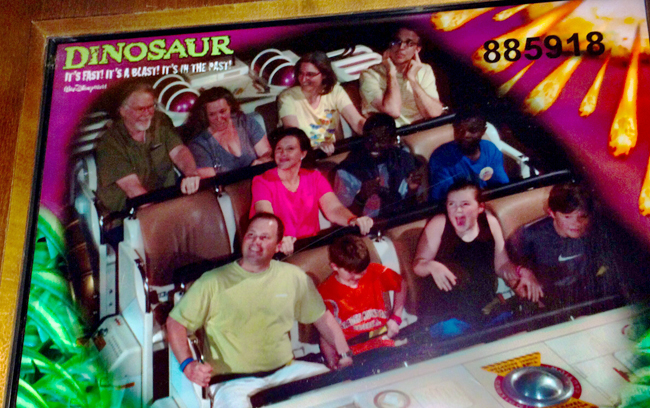 Here’s a shot I grabbed of the photo they took of us as the ride ended. The best part of the ride was that I got to enjoy my lunch 3 more times. 🙂

We finished up with the Safari ride, which is always one of the most popular rides at Animal Kingdom. I have to say that I don’t recall seeing as many giraffes, elephants, and rhinos on our previous visits as we did on this safari ride. They were all over the place and the increase in visible animals greatly enhances this ride. I also took note that they have eliminated the “Big Red/Little Red” elephant poaching scenario on the ride, something Kirk and Laura said was done because it upset too many ride guests, especially younger children. 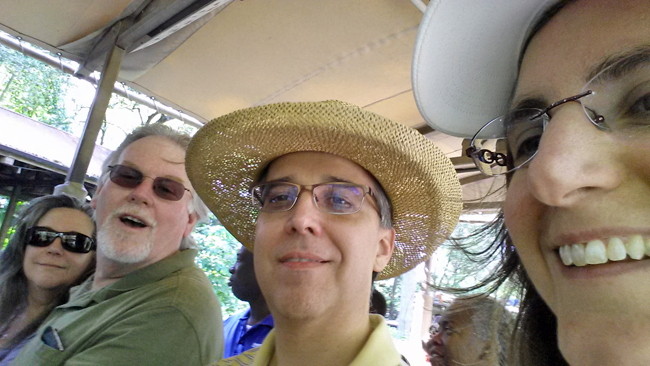 This shot is courtesy of Laura who grabbed a “selfie” of the four of us on the Safari Ride. As you can see, I was surprised.

After the Safari ride it was getting late in the afternoon and time to say “Goodbye” to Disney’s Animal Kingdom. We had SUCH a good time with Kirk and Laura, as we always do. Thanks to them both for a great afternoon!