We Do Love Our Conspiracies

Monday , 18, November 2013 J.M. Wetherington Sr. General Comments Off on We Do Love Our Conspiracies 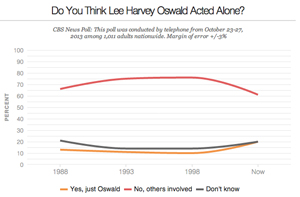 This Friday, November 22nd, will mark the 50th anniversary of the assassination of President John F. Kennedy. If you were living then, you almost certainly remember where you were and what you were doing when you heard the horrible news, even if you were too young to fully understand just how horrible it was.

CBS News has the results of a new poll up on their website indicating that a majority of Americans (61%) believe that Lee Harvey Oswald did not act alone in shooting President John F. Kennedy.

We Americans DO love our conspiracy theories.

I don’t really find this surprising. I remember my mother telling me at various times through the decade  following the assassination that those responsible were:

Congressional Leaders of both parties

It was probably that cavalcade of possible conspirators and co-conspirators that nudged me toward the position that Oswald acted alone; that he was just a sad, lonely man who had never achieved anything and could only assure his name would be known by taking the life of someone much more accomplished than he could ever be on his own.