“I Want To Hold Your Hand”

Fifty-four years ago today The Beatles had their first number one hit in the United States with “I Want To Hold Your Hand” and the British Invasion was underway. 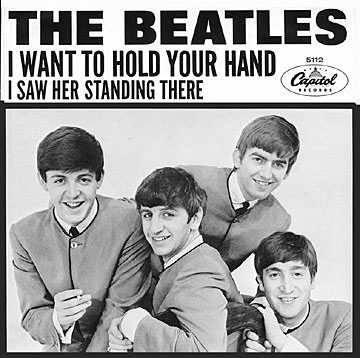 I was 8 ½ years old at the time and since we didn’t have iTunes or Spotify in those Dark Ages, we had to settle for listening to AM radio stations and boy did this song get ample airtime on every rock n’ roll station in the Greater Miami area. In addition, every girl I knew, and some of the boys I knew, owned a copy of the 45 (no, that’s not a reference to the current President of the United States) record and I imagine quite a few stereo and record player needles were worn out from the constant playing of “I Want To Hold Your Hand” across the country.

Recorded in October 1963, “I Want To Hold Your Hand”, which was written by John Lennon and Paul McCartney, was released in the UK on November 29, 1963, and two weeks later it hit the number one spot in the UK Top 50 and remained there for 5 weeks. In the U.S. it entered the Billboard Top 100 on January 18, 1964, and on February 1, 1964, it hit the number one spot and stayed there for 7 weeks before being knocked out of that spot by the group’s second number one hit in the United States, “She Loves You”, which strangely enough was the first million-copy seller song The Beatles had released in the U.K.

Eight nights later, on February 9, 1964, The Beatles made their television debut in the U.S. on The Ed Sullivan Show. I wrote about that night in my house a few years ago, but here’s a video of their appearance.