Drew Sheneman, editorial cartoonist for The Star-Ledger newspaper in Newark, NJ, hits the nail on the head with his cartoon about allowing cell phone conversations on airline flights. 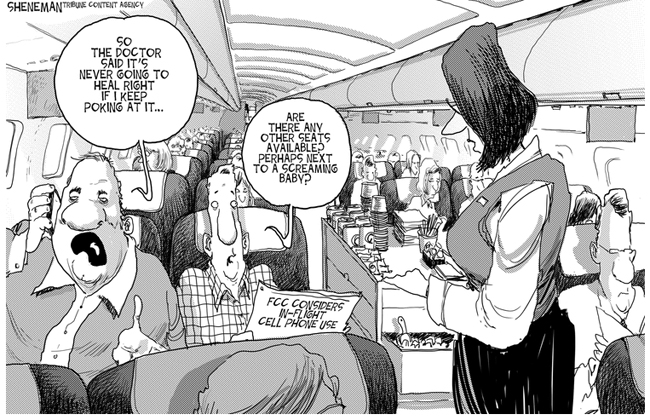 I can see a jump in sales of noise-cancelling headphones or even just an increase in usage of earbuds. For me, personally, it’s bad enough when I have someone in my general vicinity on the plane who just cannot shut up talking to their seatmate. And I’m talking the “I’ve never seen you in my life but I’m going to talk to you like we’re best buddies for the entire flight” kind of talking. Now, if the FCC and/or airlines allow cell phone voice conversations, it will be, “Blah, blah, blah…can you hear me? We’re flying over Akron, the signal must be bad.” or personal conversations of the type shown in the cartoon that most people DON’T want to hear.

I always plug in my earbuds and crank the music or podcast volume up as soon as I get seated to block out most of the noise generated by Chatty Cathys of both genders and that won’t change. But I know how it is now under the current rules listening to people have cell phone conversations before take off and after landing. It’s painful to imagine how it will be if that is taking place during the entire flight.

The FCC is scheduled to vote on December 12th about whether to put the proposal out for public comment. If they do, my comment and vote will be “No!”