Throwback Thursday – My Father Was Born This Day In 1925

Many things happened around the world in 1925.

On that day Babe Ruth, outfielder for the New York Yankees, would be rushed to the hospital for what would end up being ulcer surgery 8 days later. 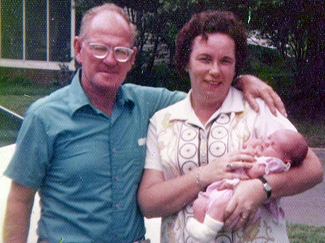 I don’t have a photo of my father as a baby, child, teenager or young adult, but I do have this photo of him with my mom and my younger brother, taken in 1962.

And in the small town of White Springs in the northern part of Florida, not far from the Georgia state line, my father, James Edward Wetherington, was born.

It’s hard to remember if there has been even one day that, in some form or fashion, he has not been in my thoughts. When I put something back where I got it from, I hear him saying, “Put it back where you got it.” and when I turn off the lights in a room I’m leaving I hear him saying, “Boy, I work for the gas company, not the electric company.”  as clear as if he’s there.

And everything numerical was always 40, such as “I’ve told you 40 times not to do that.” or “I guess you’ll be 40 years old before you listen to me.” so of course a few years ago I suddenly found myself doing the same thing without even thinking about it.

What I also found was this post from a decade ago on the occasion of my father’s birthday when I had a different blog. 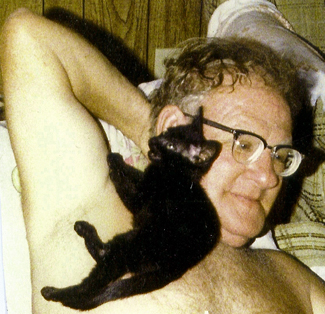 Dad, probably in the mid-80’s, lying on the couch shirtless with a kitten he and mom had recently adopted.

My father would have been 80 today, had he not died 5 years and 4 months ago.

Sometimes I entertain the “What if?” visitor in my mind and today as Ann Marie, Mikey and I spent part of the day with my mom, I wondered, “What if dad were still here?” I wondered if things would be different and if so, how different? The sad truth is that the stroke he suffered some 15 years ago took away a lot of who my dad was, or maybe it caused him to lose the ability to express who he was. And this is where the heart and memory play tricks with you (or perhaps are kind to you) because as I wondered “What if?” the image of my father is as he was before his stroke. A twinkle in his eyes, a smile on his lips, walking under his own power, speaking clearly, able to use both his arms and able to think and make use of his full faculties. Then the mind taps you on the shoulder and points out that his last 10 years were nothing like that and your eyes tear up, your breathing catches and you silently curse what life and fate fashioned in that regard.

But here’s to the hope dad; the hope that you are somewhere in which all is good in your existence and you are happy. I love you and miss you still.

And so, on this Throwback Thursday when I note that my father was born this day in 1925, it is Happy 90th Birthday, dad. You are loved, remembered and missed.