Last week we went to Downtown Disney to do some shopping and met a former co-worker of Cindy’s. Afterward, the three of us went to lunch at Uno Chicago Grill in Lake Buena Vista. It’s been at least 2 years since I’ve been in an Uno and they have added many items to their menu, but it was the addition of the Ziosk that I found interesting. 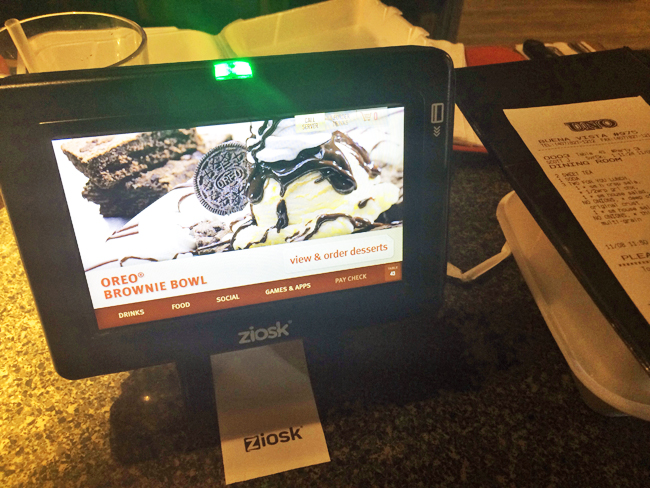 Ziosk, which bills itself as “…the first ordering, entertainment and pay-at-the-table touchscreen for casual dining.” is a 7 inch wireless tablet at the table that allows you to place your order, play games (for an upcharge) and pay for your meal right at your table. Here’s a YouTube video showing how it works.

We didn’t place our order through Kiosk because 1) we were on a limited time frame and didn’t want our unfamiliarity with Ziosk to cause delays in our orders and 2) we had some special requests that we weren’t sure could be handled by Ziosk. However, I did pay for the meal and add a tip for the server by swiping my card on the tablet. If you want to add your email address (I did) then you can have the paid receipt emailed to you immediately.

I like the technology and the convenience. I think that if I used the device to order my entire meal I would probably reduce the amount of gratuity I usually give, since (as far as I can tell) no one is coming to the table to take the order, only to deliver it. That’s not going to be good for the servers, but then I’m a person who is of a mind that restaurants should raise their prices enough to pay the servers a livable wage so that tipping is eliminated completely. But, that’s a subject for another post.

Ziosk’s webpage announces that they are coming to Chili’s soon and I’m sure that successfully rolling out to a larger franchise such as Chili’s will mean their presence (or the presence of copycat devices) will become ubiquitous at other restaurants. For now, I’m ready to return to Uno to try the entire experience.

Have you used Ziosk, or something like it, while dining out?