A couple of days ago I posted about my visit to the William J. Clinton Presidential Library & Museum here in Little Rock and I thought today I’d share some of the photos from that visit. 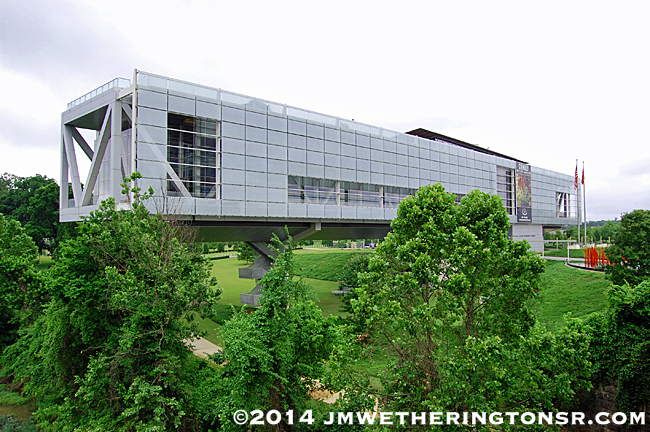 View of the William J. Clinton Presidential Library & Museum from The Bridge to the 21st Century.

The William J. Clinton Presidential Library & Museum has a lower level that houses the restaurant 42 and a coffee bar; the ground level which includes the main entrance, visitor’s center, a presidential limousine and an exhibit on the work of the Secret Service; the second level which contains the orientation theater, a replica of the cabinet room as it existed during President Clinton’s administration, a large timeline exhibit and alcove exhibits on each side; and the third level which houses an exhibit about the early years, life in the White House, and a replica of the Oval Office as it was during the Clinton administration. And if you look at the top right side of the building you’ll see a dark area on the roof; this is a residence for the Clinton’s when any or all of them are in town, rooms for the Secret Service agents assigned to former President Clinton and an office for the President to use when he visits by himself, which averages once a month. The roof has grass and a garden that you can’t see (I couldn’t either because that area is off limits to visitors) and there’s probably a Batcave up there somewhere too, for all I know.

One of the Dale Chiluly pieces of glass art work created especially for the lobby. 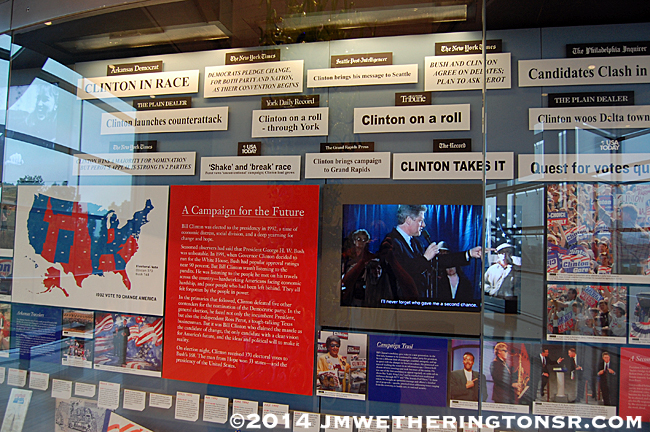 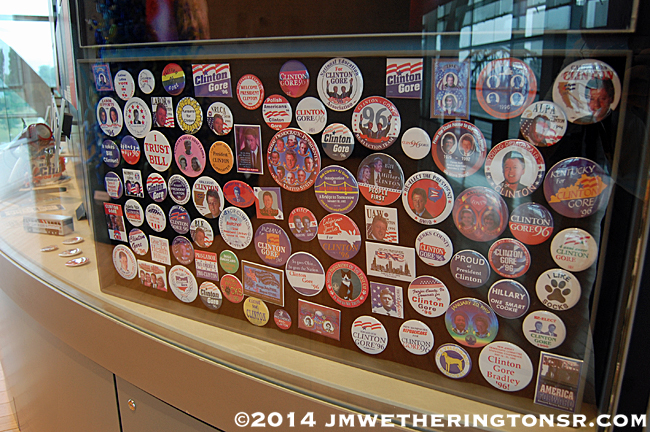 A multitude of various campaign buttons. 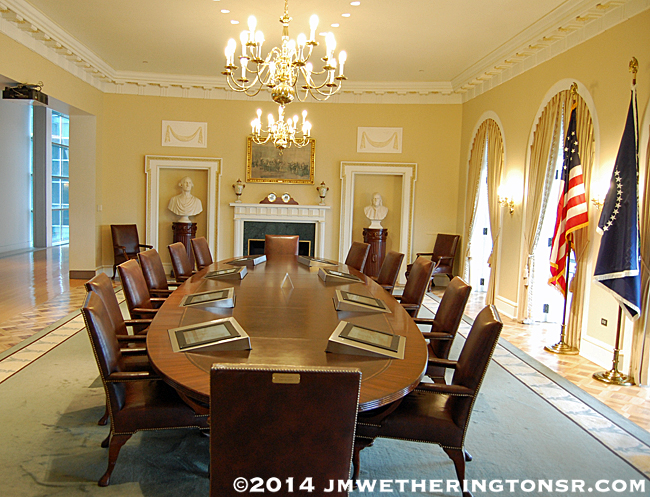 This is a replica of the Cabinet Room exactly as it appeared during the Clinton Administration. I was the only one in our tour group who knew where the President sits during Cabinet meetings. Do you know? 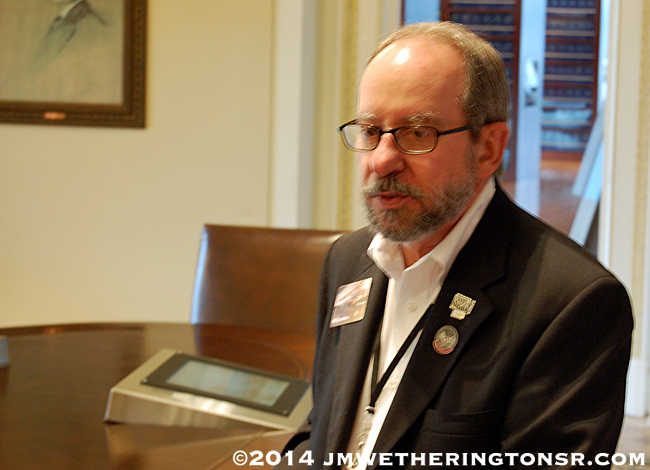 This is our tour guide, Bill Jacobson. He is a professor at the University of Arkansas Little Rock and is Chair for 2 Departments. He has known Bill and Hillary since he met them at Yale when they were all in school and travelled across the U.S. campaigning for Clinton during his first Presidential run. Bill volunteers each weekend at the Library and we were fortunate to get him as our tour guide. 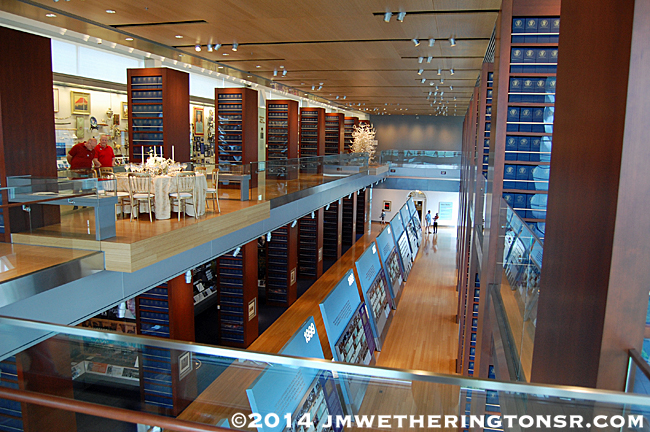 Looking down from the third level you can see the huge Timeline Display in the middle stretching the length of the exhibit area. 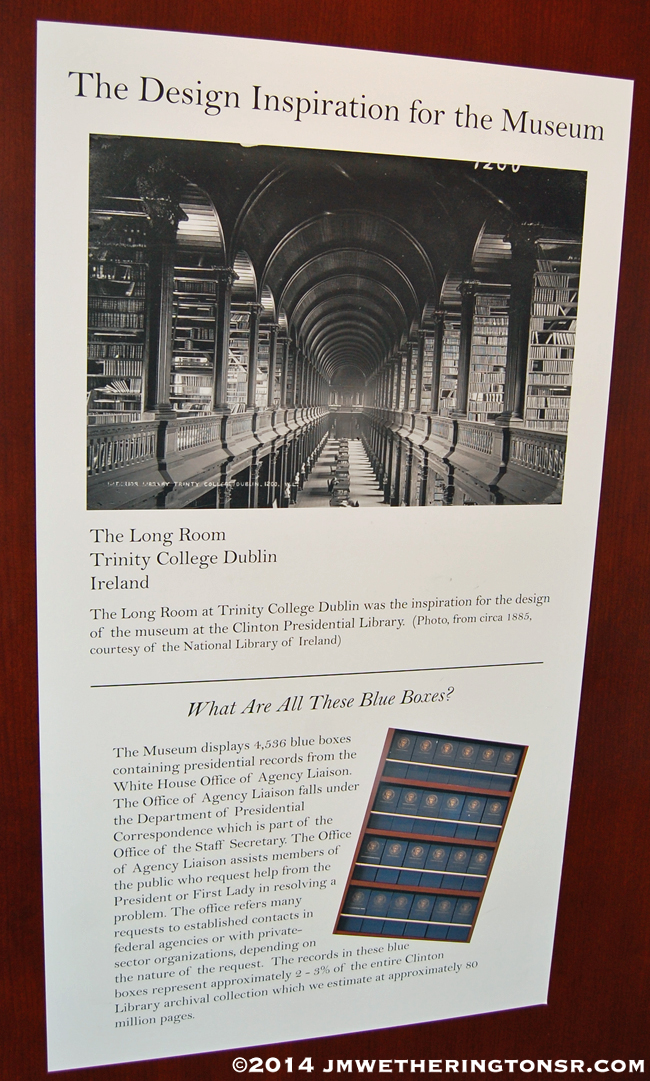 If you look at the previous photo, you can easily see the square columns spanning the second and third levels. These columns contain a small portion of the documents that make up the archives of the Clinton Presidential Library. President Clinton was inspired to display them in this manner after visiting the Trinity College in Dublin, Ireland, as shown in this photo. 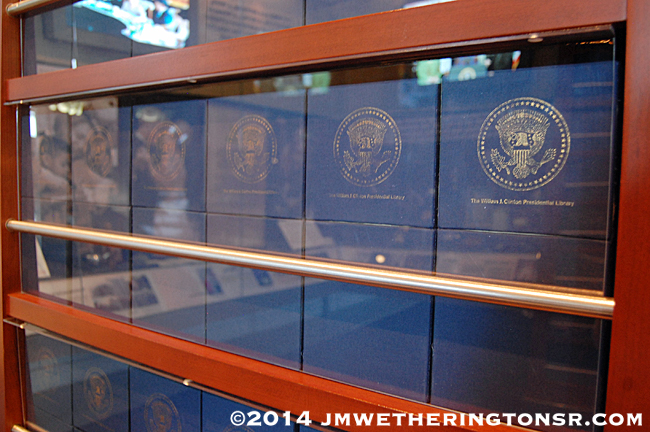 Here’s a close up of the boxes in each column. After the first 6 months that the Library was open, they discovered that they had to install that plastic sheeting you see because people kept pulling the boxes out and opening them to look at the contents. 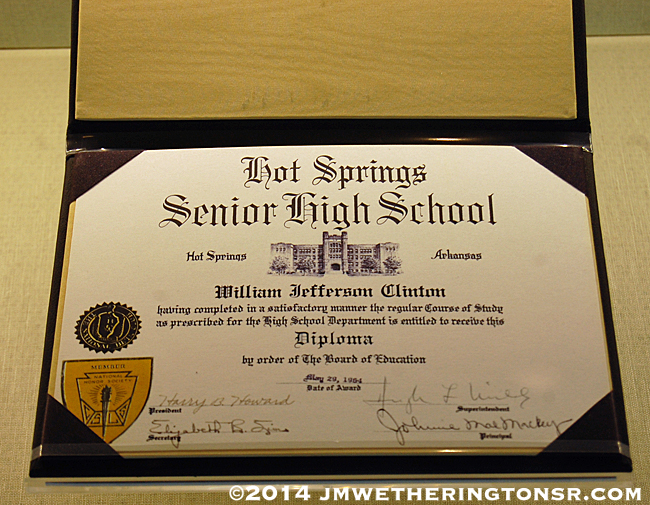 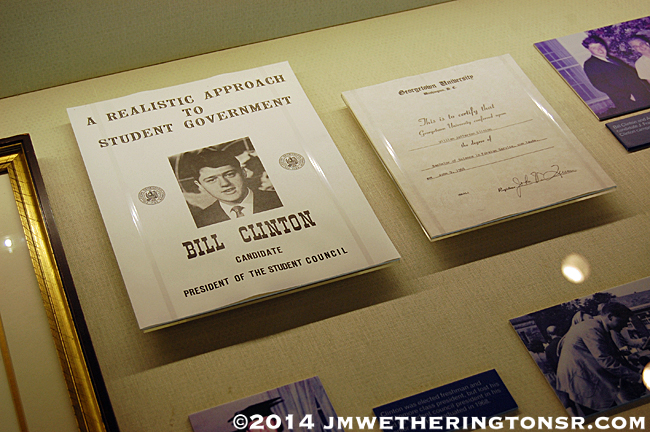 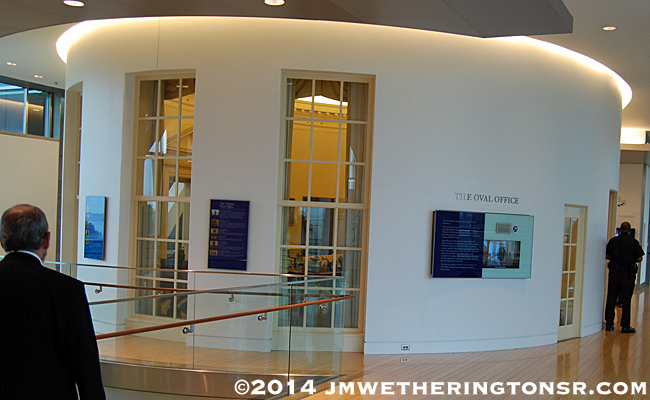 The Oval Office exact scale replica just as it appeared during the Clinton administration. 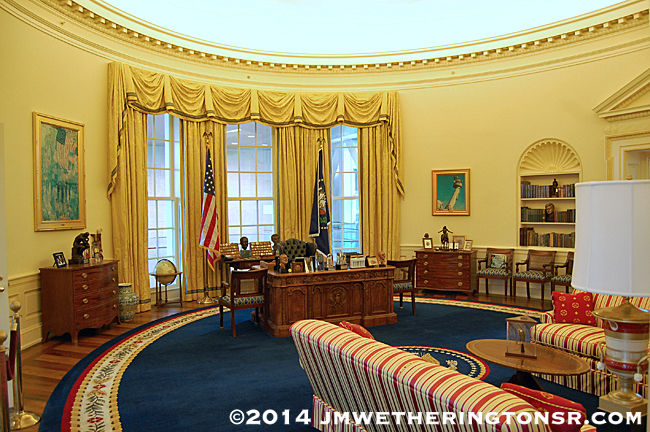 You can’t actually enter this Oval Office replica, except for one small doorway that allows you to step in about 3 feet. 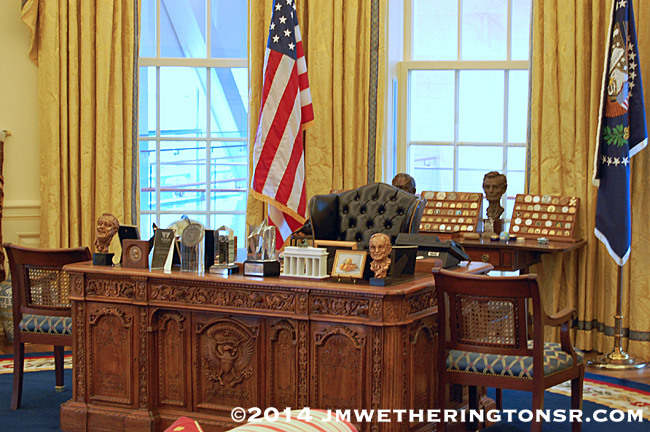 While everything in this display is an exact replica, the items on the desk and on the credenza behind the desk are the actual items that President Clinton had on his desk during his administration and were donated by him for this exhibit.

What it would look like to be sitting in that chair. 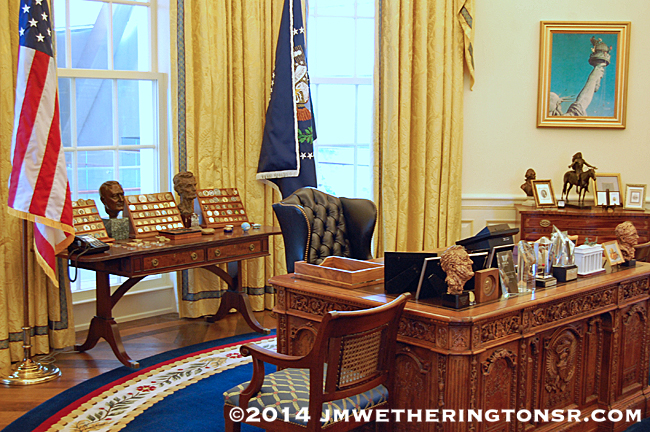 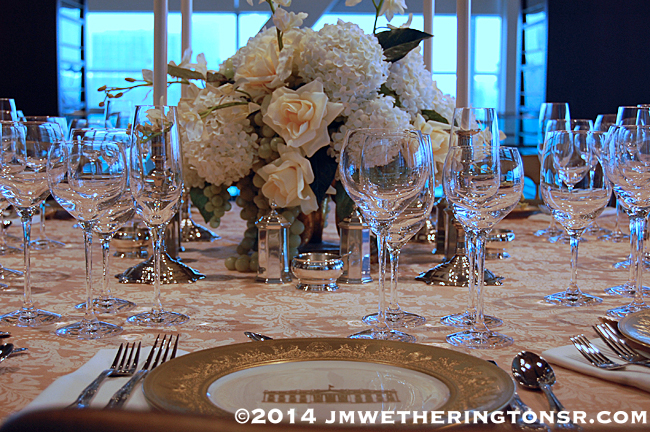 This is a replica of the table settings for the White House dinner that celebrated the 200th anniversary of the opening of the White House. The plates were designed by First Lady Hillary Clinton. 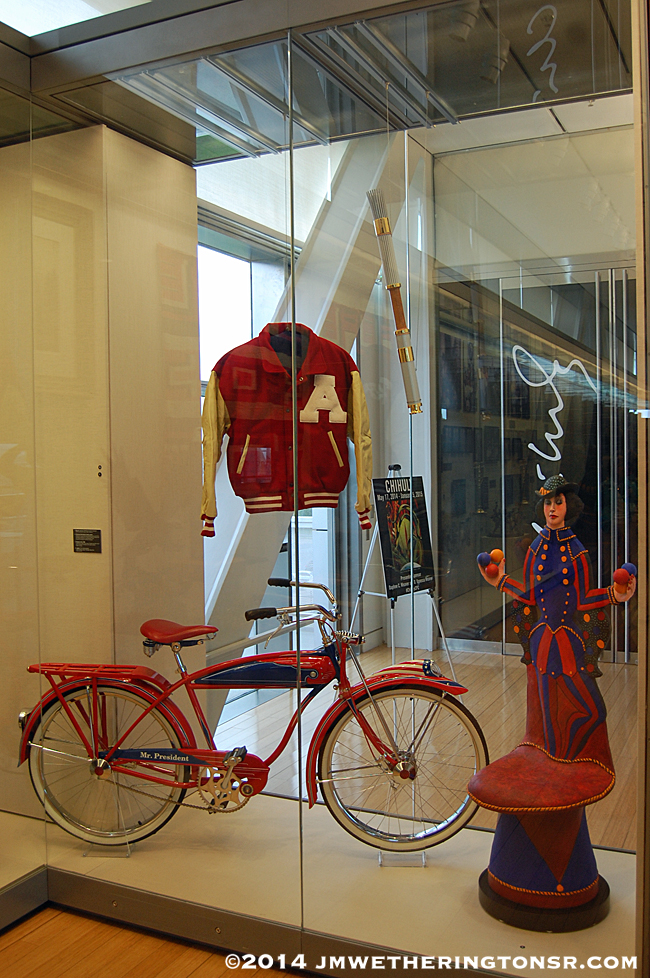 Interesting story about this exhibit. Until about a year ago the bike and jacket in this display were the bike and jacket that Lance Armstrong rode and wore in several Tour de France wins. Those were replaced with this bike which is typical of the bikes in the era that Bill Clinton grew up in and a jacket from his school. 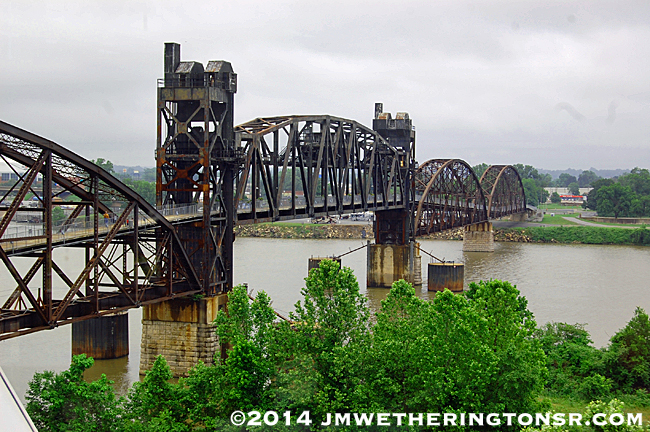 Looking out from the North end of the Library to the Clinton Presidential Park Bridge that spans the Arkansas River. This bridge is a former railroad bridge, built in 1899. It has been turned into a pedestrian bridge, leading from the North Little Rock area on the far side to the Clinton Presidential Park and has been nicknamed the Bridge into the 21st Century.

This was a great place to tour and visit. If you ever have the chance to do so, I recommend you go and enjoy it for yourself.