The Unexpected Passing of a Friend – Art Littlefield

Note: It’s taken me several sleepless nights to try and put these words together. They still seem woefully pathetic in expressing the sadness I carry and the good memories of the small part of my friend’s life that I was honored and humbled to be a part of, but I hope they will do it justice.

I’m trying, and finding it extremely difficult,  to process the unexpected passing of a friend.

I’ve been trying to since Tuesday morning at approximately 8:30 am MST when Cindy called me crying to tell me that our friend, Art Littlefield, had passed away Monday. I was driving across the barren Lakota Sioux Pine Ridge Reservation on my way to the FEMA office in Pine Ridge and the news was such a stunning blow that I could not even accept what I was hearing. I thought she must be referring to his dad, who is also named Art.

The biggest difference was that we were using a contractor to build our cabin, but this lady’s son was building his with his own bare hands.

His own bare hands.

A few months after that Cindy and I, along with her parents who had already met Art by that time, met Art for the first time over breakfast at Joey’s Pancake House in Maggie Valley. I remember how surprised I was by his appearance. Having been told that he had cut down trees on his property by himself, had stripped their bark off and cut them to the lengths he needed, had cleared large rocks and leveled an area that provided a wonderful view of the western end of Maggie Valley from 5,000 feet up the mountain, well I expected to meet a man who was at least 6’4” weighing 300 pounds and all of it muscle. Art was maybe 5’ 10”, weighed less than 180 pounds, and was lean with a runner’s build. With his wire-rimmed glasses, he looked more intellectual than outdoorsman. Yet, as I was to discover, he was both. 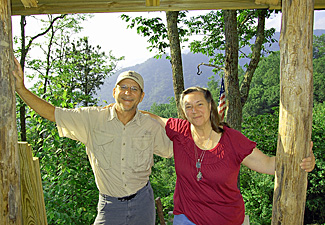 Art and Cindy at the door to his cabin in Maggie Valley.

Over the next few years, we saw each other every few months. He was spending a lot of time coming up to Maggie Valley from his home in Melbourne, Florida to work on the cabin, hike around the area and bringing his family up to visit. After a year or so, he finished the one-room cabin with a sleeping loft above the room and a small storage area underground beneath the room.

When our cabin was completed, I believe he was the first or second friend we had over for dinner. He brought a beautiful photo of a nearby waterfall that was framed, signed, and numbered by the photographer, as a housewarming gift. Over the years, we enjoyed several dinners with him at our cabin and many additional breakfasts at Joey’s. He was always welcome to  use our shower or our guest room when it was cold. He occasionally took us up on the shower offer, but never on the use of the guest room. He liked his own cabin, and who could blame him? He, along with his wife and sons, came and spent the Christmas holidays at our cabin one year while we were in Florida, and we heard so many funny stories from that visit. He and Cindy and I hiked around to the other side of Sheepback Mountain one time when he was up visiting. And he was always adding improvements to his cabin, many times with the help of his nephew Chris or friends from Florida. He eventually added a wood burning stove, some furniture and even put in a sun-shower to give him at least some warm water. If Cindy and I went up to our cabin, we would go by and check on his, and he did the same for us if he was up at his cabin. He was one of only a few people who knew where we hid the cabin key. When he had a big family celebration in Maggie Valley one year at a nearby hotel, he graciously invited Cindy and I and her parents who were  up visiting to attend. We had a very nice time. Art was just one of those people that I enjoyed being around, and for those who know me, those kinds of people are few and far between. 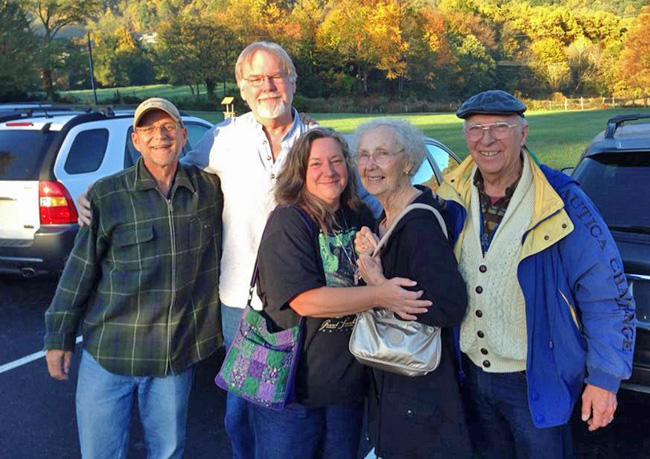 From left to right: Art, me, Cindy, Cindy’s mom and dad, in the parking lot of Joey’s Pancake House, October 2014.

One of the main things I will always remember about Art was his smile. His smile always grew from his mouth, traveled to his eyes and then spread across his entire face. His attitude, his demeanor, his very body language and presence, if you will, was always one of courtesy, patience, kindness and…the best word I can come up with is encouragement. He was, simply put, one of the finest human beings I have had the pleasure of knowing and the honor of having in my life.

Cindy says the way to keep him alive is to remember all of these good things about him and to hold those memories in our heart. She’s probably right. But I can’t help but realize that we will never have the chance to make any more memories with Art, and that breaks my heart.

6 thoughts on “ : The Unexpected Passing of a Friend – Art Littlefield”