The Malignancy of Secrets

This post will be a bit deeper than usual, but I need to get this out of my head. No names are used to protect the innocent…and, unfortunately, the guilty as well.

Last Sunday night, Cindy and I were watching “The Space Between Us” on demand when Gary Oldman’s character, Nathaniel Shepherd, said a line to his son that riveted my attention and solidified feelings and thoughts I had been having over the previous week when he spoke these words;

“But it’s like the malignancy of any secret. It just kept getting worse.” 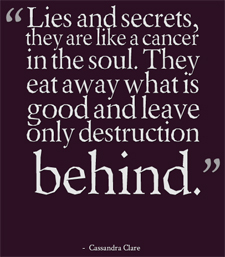 Since New Year’s Day we had been dealing with that very subject; the malignancy of secrets. Secrets that, like the plot of some dime-store novel, had been kept for years and years by people and now were causing results that were driving events beyond the control of innocent victims.

I had said to Cindy on New Year’s Day that secrets not only had consequences that would have to be dealt with, but that sometimes they also have unintended consequences.

I wish I had not been so right about that.

Trust me when I say that I was not blameless in keeping this secret. I was asked to do so by the one person who had the only valid reason for asking such a thing. And I kept it because I was told it was a one-time thing and would never happen again. 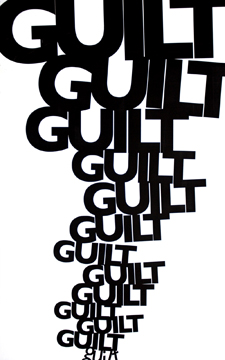 And then my anger exploded like a bomb in my soul. I was angry with myself for being an unwitting part of hiding something that had enabled someone to continue their depraved and repugnant behavior. And then I was incredibly angry with those who had initiated keeping the secret and supported keeping the secret because, even with the revelation of new, horrid actions there was still no one who wanted to deal with this person in the manner which they so richly deserved. Those that knew seemed more than content to simply keep hiding the secret.

What I could not, and still cannot, fathom is how people could keep this vile, repugnant, reprehensible behavior of someone a secret and never confront that person. Especially when the disgusting behavior and actions raised their ugly head once again and now have, no doubt, ruined the life of someone else who should never have had to endure such despicable words and thoughts. 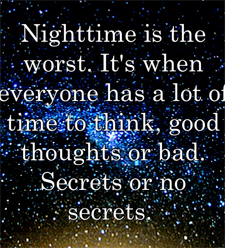 As a result, my feelings for and about some people had changed dramatically over the previous 6 days due to those secrets and the abhorrent decision to continue acting like these contemptible behaviors and actions were not occurring again. They just let this sick person keep acting like they are moral, upright, and honorable when they are none of those things. These are not the kind of people I want in my life. Right now, I don’t even want myself in my life because I still feel the weight of responsibility and guilt. Work and books help to alleviate some of that weight, but sleep comes fleetingly and when it does it is filled with nightmares that wake me throughout the night. I have tremendous anger and guilt at myself, and a tremendous amount of anger at those who still refuse to confront this person.

This whole sordid situation truly represents the truth of consequences and unintended consequences that are caused by the malignancy of secrets.

6 thoughts on “ : The Malignancy of Secrets”