The Making of The Monster Mash

One thing I love about Halloween (apart from the candy) is getting to hear “The Monster Mash” played so often. It’s one of my favorite holiday songs. Below, thanks to Mental Floss, is the story of how the song came to be and some of the results of its popularity.

Robert George Pickett, the lead creator of the song, grew up in a movie theater in Massachusetts where his father was the manager. Unsurprisingly, he became infatuated with the films shown and developed a lifelong desire to star on the silver screen. This childhood experience also gave him a chance to practice celebrity impressions, and his best impression was of Boris Karloff.

Upon turning 21, he immediately moved to Hollywood to live his dreams of stardom. While his acting career never really took off, he did get involved with rock music and started playing with a doo-wop group called The Cordials. During performances, he would often bust out his Karloff impression, much to the pleasure of audience members.

One day in 1962, band member Lenny Capizzi encouraged Pickett to do more with his impression than a silly skit during performances. The two men then started working on a humorous dance song based around the narration of a Boris Karloff character. Originally, they thought of working with The Twist, but that dance craze was out of fashion, so instead they opted to make the song work with The Mashed Potato. They titled the track the “Monster Mash” and recorded it under the band name “The Crypt Kickers.”

To enhance the setting of the tune, the band added in a number of sound effects, such as rattling chains and a creaking coffin. Because they recorded the track themselves, they had to do these sound effects themselves. The coffin noise was made by pulling a rusty nail from a board, the bubbling cauldron was created by bubbling water through a straw and the chains were just chains dropped on the floor.

Aside from the main Boris Karloff impression, Pickett enhanced the song’s imaginary star power by adding his impression of Bela Lugosi’s Dracula when he asks, “Whatever happened to my Transylvania Twist?” 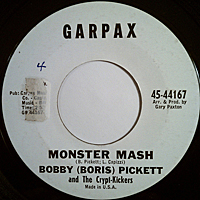 One of the 1,000 copies that Gary S. Paxton (GARPAX) had pressed to hand out to radio stations.

While the boys knew their record was a hit, the record labels disagreed. Every label they shipped the song to rejected it. So the record producer, Gary S. Paxton, printed one thousand copies and then delivered them to every radio station he could find. The stations loved it and within eight weeks, the song was at the top of the Billboard charts, peaking on October 20. These days, it still receives a quite a bit of airplay every Halloween.

The song was re-released a number of times and appeared on the Billboard charts three more times after its original release, once in December 1962, once in August 1970 and once in May of 1973. Interestingly, none of these re-releases made it on the charts around Halloween. The song didn’t make it onto the BBC charts until 1973, though, because the censors refused to release it in 1962, claiming it was too morbid. In 1973, it peaked at #3. It reentered the British charts in 2008, peaking at #60.

To follow up on his success, Pickett released a Christmas themed “Monster’s Holiday” in 1962 that reached #30 on the charts. Decades later, he tried to capitalize on the growing trend of rap music by releasing “Monster Rap” in 1985. This song dealt with the scientist being frustrated that he couldn’t teach his monster to talk. In the end, he solves the problem by getting the monster to rap.

With a song this silly and this successful, it’s not surprising that the tune has been covered by so many notable artists. Including:

* Only two years after its original release, the Beach Boys covered it on their album, “Beach Boys Concert.”

* Boris Karloff covered the song in a 1965 episode of Shindig!

* Horror icon Vincent Price also took notice and recorded a version that was released in 1977.

* In 1994, Alvin and the Chipmunks did the song in their Halloween special “Trick or Treason.”

* The Misfits released a music video covering the song live in 1997. In 1999, they released a studio recorded version.

* In 2003, Disney released a version of Goofy singing the song for the album “Mickey’s Monster Bash.”