The Beatles On The Ed Sullivan Show February 9, 1964

It was 50 years ago tonight. I was 8 ½ years old and my mom, dad and I gathered in the living room (my little brother was asleep in his room, as most 2 year olds should have been at that hour) to sit in front of our black and white TV to watch the American television debut of the British rock and roll group, The Beatles, on The Ed Sullivan Show.

My parents usually watched Ed Sullivan on Sunday nights. Most of the time I didn’t join them because there weren’t usually that many guests that were of interest to me. But the British Invasion was about to begin and I had already heard a couple of their songs on my little transistor radio and wanted to see what all the fuss was about.

I remember my dad complaining about their “hippie hair” during the songs (he was a country/western music fan). I remember me asking why all these girls were screaming and crying and sobbing and fainting. My mother said that when she was a girl the same thing had happened when Frank Sinatra (I don’t think I even knew who Sinatra was at that time) sang and I just could not imagine my strict, disciplinarian, by the book mom EVER screaming for some singer (though she DID like Elvis and used to tease my dad by telling him that Elvis could leave his shoes under her bed anytime…and I didn’t get THAT either at 8 years of age, though I would later on).

The music of The Beatles was a large part of my life from that night through my mid-teens. My generation of kids listened to it, danced to it, played it in our own bands and loved it as it became a part of the musical landscape of the 60’s and 70’s across this country. 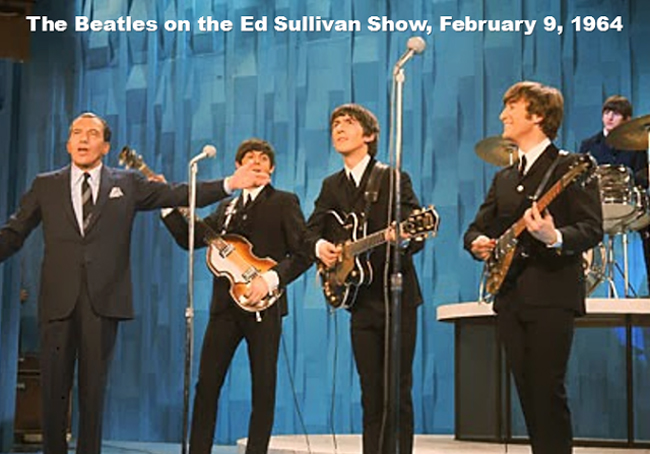 Publicity photograph taken on stage when The Beatles made their debut on The Ed Sullivan Show.