There’s nothing like having fire alarms go off for 25 minutes on a Sunday morning at 8am to start your day off right. 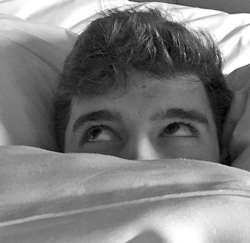 I had already been up since 4am (Thursday and Friday nights I was nightmare-free for the first time in a couple of weeks, but last night they returned and had awakened me), first just lying in the dark thinking about things that were on my mind and in my heart, and then sitting up and continuing to read the Steve Jobs’ biography by Walter Isaacson, so thankfully I wasn’t awakened by the flashing strobe lights and piercing sound of the alarms. But I wasn’t happy about it either, lol.

Pulling back the covers, I moved out of the bed and headed to where my pants were to start throwing on clothes and grabbing things I would not want to lose in a fire. But then I remembered that earlier in the week I had walked out into the front room area to make breakfast before getting ready for work and discovered a note under the door from the hotel stating they would be conducting fire alarm tests that day from 8am until 10am. Since I would be at the office during those times I just threw the notice in the garbage, but now I wondered if they might be doing the same thing this morning so I walked out to the front room and sure enough there was a note under the door notifying guests of the testing again today from 8am to 11am.

For the next 25 minutes, alarms in my room, the rooms around me, and the hallway echoed with loud sounds and flashed with lights as they ran their tests. Once the almost 30 minutes of sound and light were concluded, there was no further testing.

This is NOT my video, but the lights and sounds are similar to the ones on my hotel.

Now, I am completely in favor of the testing of such systems to insure the safety of guests, employees, and nearby establishments. No one in their right mind wants there to be loss of life and/or property damage because a system was not functioning as it was intended.

But, I have serious questions about the mentality of hotel management and/or staff that would conduct such tests on a quiet Sunday morning when most people are off work and hoping to relax a bit. Admittedly, I don’t even know for sure if the scheduling of these tests are in the decision-making realm of the hotel or instead are the province of the local fire safety officials, but either way, the question remains the same;

“WTF were you thinking??”

I mean, really, you can’t tell me that the testing could not have taken place between 11am and 2pm or 2pm to 5pm this afternoon, if it HAD to be on a Sunday.

I’m sure I’ll be asking hotel staff WHY it had to be early (early to me, lol) on a Sunday morning tomorrow morning when I stop by to pick up my bill, but if anyone reading this happens to know how those decisions are made (whether it’s the hotel or the local fire department), please drop a comment and enlighten me.