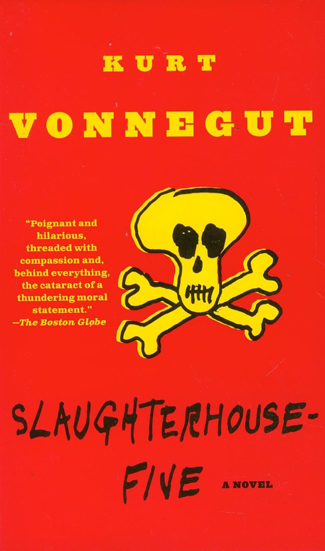 It’s difficult for even me to believe, but this is the first work of Vonnegut’s I’ve ever read. You would have thought I would have read it in 1970-71 when I was 15 & 16 and in the American Literature class in school, but my teacher was a very conservative type who did not entertain the notion that anything other than the classics would qualify as American Literature. Then somehow, I have never picked it up through the years until now.

“Slaughterhouse Five” is the story of Billy Pilgrim, a man who joins the army and becomes a POW of the Germans in WW II in the city of Dresden when Dresden is destroyed by Allied firebombing. Pilgrim survives because he and some other prisoners are being held in an underground makeshift holding area that used to be Slaughterhouse Five in a meatpacking district. Shortly after that the war is ended and Pilgrim returns home to marry the daughter of the head of an optometry school he is attending. Years later, on the night of his oldest daughter’s own wedding, he is abducted by aliens and transported to the their planet to be studied. The aliens also abduct a Hollywood starlet and get Pilgrim and the starlet to mate. They then return Pilgrim to Earth only a few seconds after they originally abducted him, explaining that they view time as a whole, like viewing a mountain range in its entirety rather than a single peak. Somehow, Pilgrim is now also able to view all of his life in the same manner, so he now knows all the good and bad things that will happen, even when his death will occur. He even calmly boards a plane that he knows will crash, leaving him as the only survivor, and later blithely performs an act that he knows will lead to his death.

Without giving away any more, that is the substance of the story Vonnegut tells. It is the style in which he tells it that makes this the work that it is and if you’re not prepared for that style you may be put off a bit at first. In short, the story is not told in a linear fashion in order to emphasize the “viewing time as a whole” viewpoint of the aliens (and Pilgrim). Scenes jump back and forth and forth and back, which can be disconcerting. Vonnegut is also a satirist, especially in his view of war.

Vonnegut also employs a device that while aggravating at first, eventually accomplishes his desired effect. Every time it is mentioned that someone or some group dies or death is even mentioned, he immediately follows that with the statement “So it goes.” After the fifth time I was getting pretty ticked, but by the one-hundredth time I had become inured to it. And that was his whole point, to make you realize that you become hardened to the constant onslaught of death and dying.