I mentioned a few days ago that I was reading some old comic books that I enjoyed as a kid. I also mentioned in that same post;

Many thanks to my mom and dad who, even though we were a middle class income family, always found a way to buy me things like books, comic books, science kits, art courses and model kits…really anything they thought would contribute to my knowledge, entertainment and acquisition of different skills that I might use in later life.

The “art courses” phrase in there was in reference to the ad below for the Famous Artists School, which appeared in so many comic books and magazines such as the TV Guide. 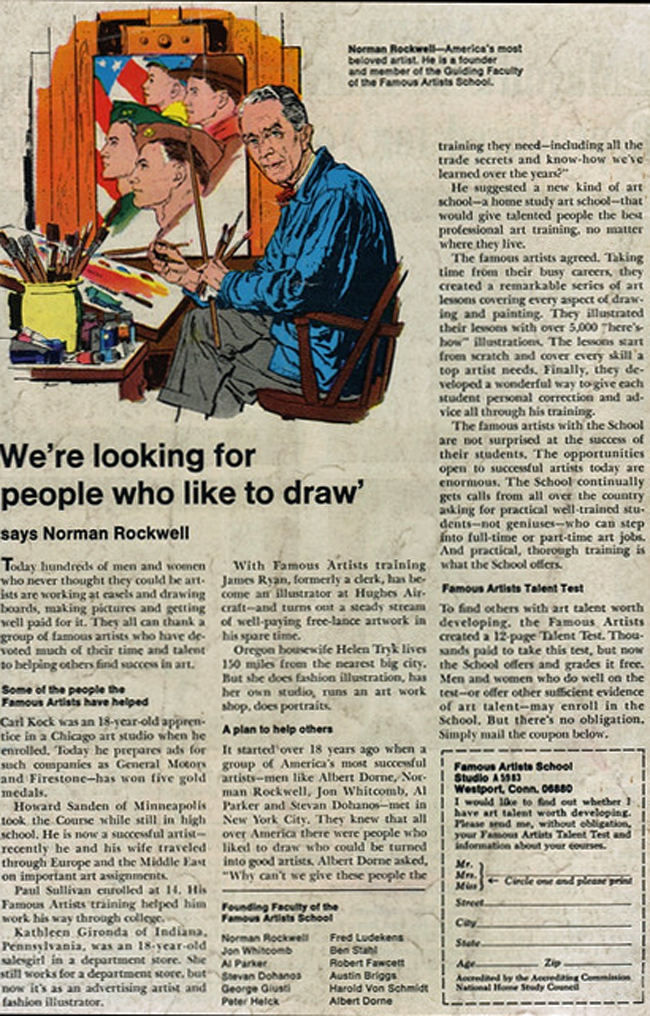 Later the ads would be much shorter and simpler, with “Draw Winky” line art, but this early one with Norman Rockwell got my attention and sparked my interest. I took the test and passed (who didn’t?, lol!) and a salesman came by and sold my parents and I on enrollment in the Famous Artists School. It wasn’t cheap and they signed up to make monthly payments so I could enroll. Course assignments were completed at home and then mailed off for critiquing and instruction. I wish I still had those course materials, I’m not sure what happened to them. But seeing this ad brought back those memories.

My dream, as a boy of 8 to 16, was to draw for those very same superhero comic books I was reading. My talent was moderate and increased with practice and instruction, but I never really had the skill to excel at storytelling (framing and placement of characters and action), which was a major part of superhero comic book art. My life went in a different direction and other than some doodling and a short term attempt to return to drawing in the intervening years, I’ve never visited that area of my past again.