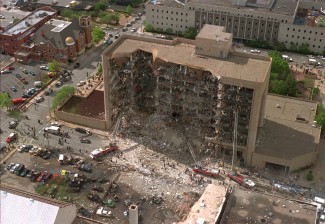 On April 19, 1995, at 9:02 am, the single largest act of domestic terrorism our country has ever experienced took place at the Alfred P. Murrah Federal Building in Oklahoma City, Oklahoma. It was a day that began like any other day for the Federal workers, visitors to the various agencies in the building and children in the daycare center for workers’ children.

The eventual death count reached 168, including 19 children. One was a nurse who was struck in the head by falling debris as she worked to treat victims still trapped in the building. Hundreds of others were injured in the blast and subsequent building collapse, some for life.

President Bill Clinton said at the time, “The bombing in Oklahoma City was an attack on innocent children and defenseless citizens. It was an act of cowardice and it was evil. The United States will not tolerate it, and I will not allow the people of this country to be intimidated by evil cowards.”

The aphorism of the museum and memorial is this;

“We come here to remember those who were killed, those who survived and those changed forever. May all who leave here know the impact of violence. May this memorial offer comfort, strength, peace, hope and serenity.”

When Cindy and I visited New York City in January of 2013, we decided we could not visit the 9-11 Memorial because we did not think we could endure the empathetic pain associated with it.

I had the same feeling of dread when I visited the Oklahoma City National Memorial & Museum on Saturday, June 27th and after walking through the memorial and museum, I wish I had listened to that sense of dread and skipped the visit. It was soul-wrenching to listen to the sound of the blast that was recorded during a Water Reserve hearing in the building next to the Murrah building; to hear the screams of those who were injured and killed; to feel the fear and to see the carnage; and to re-live the tv news footage. At the end of my visit, I could not find the “offer of comfort, strength, peace, hope and serenity.” only a feeling of depression and sadness in the very core of my being.

All I can share with you are these photos. 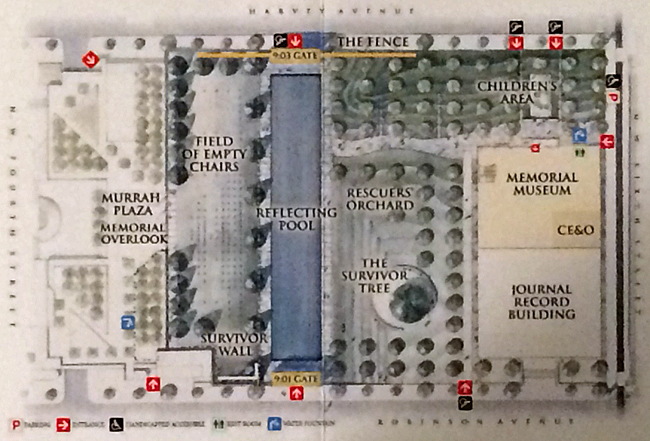 Illustration showing the area from an aerial view and pointing out the historical and memorial locations. 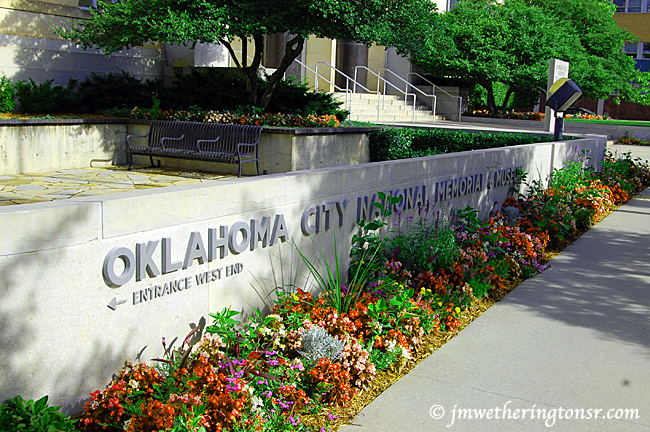 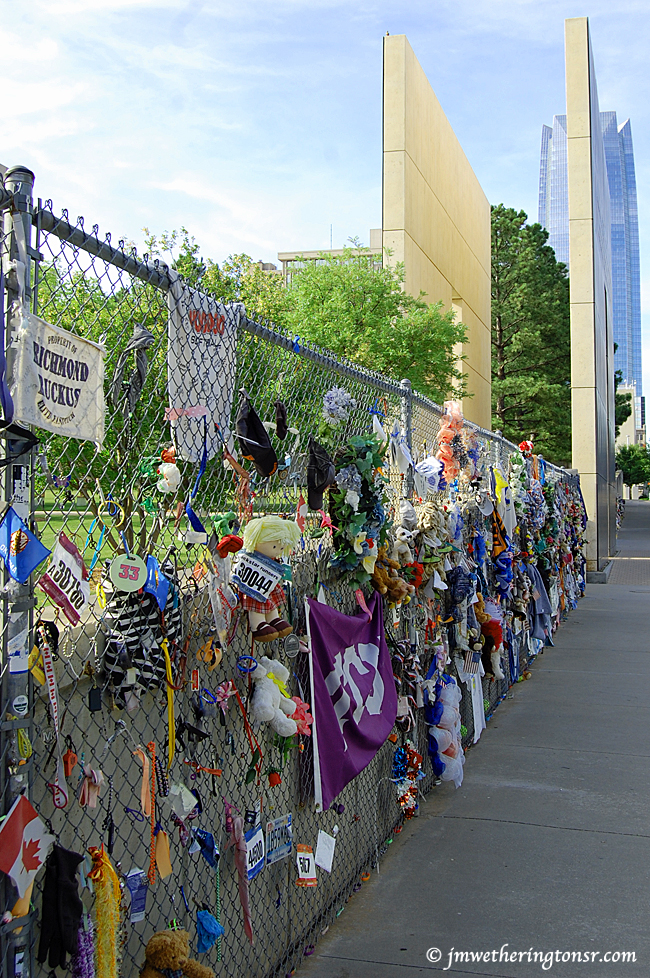 The first fence was erected to protect the site of the Murrah Building and almost immediately people began to leave tokens of love and hope on the fence. Those items now total over 80,000 in number. Some are preserved in the archives. Today, more than 200 feet of the original chain link fence give people the continued opportunity to leave tokens of their own. 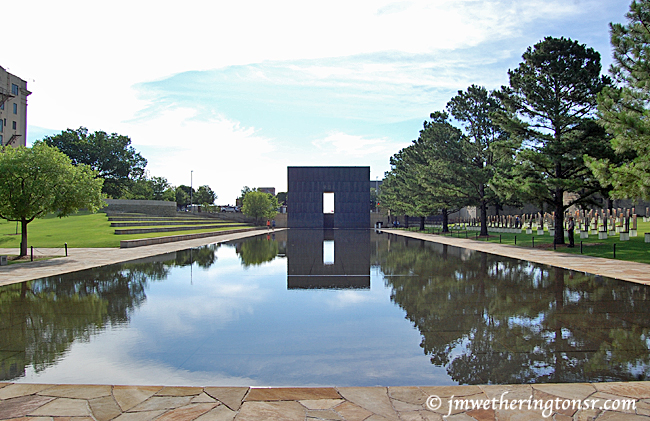 The reflecting pool occupies what was once N.W. Fifth Street. Here, a shallow depth of gently flowing water provides a peaceful setting for thoughts of remembrance. At each end of the reflecting pool stand monumental twin gates which frame the pool as well as the moment of destruction, 9:02. The East Gate has the time 9:01 engraved on it and symbolizes the innocence of the city before the attack. The West Gate, which has the time 9:03 engraved upon it, represents the moment Oklahoma City was changed forever. 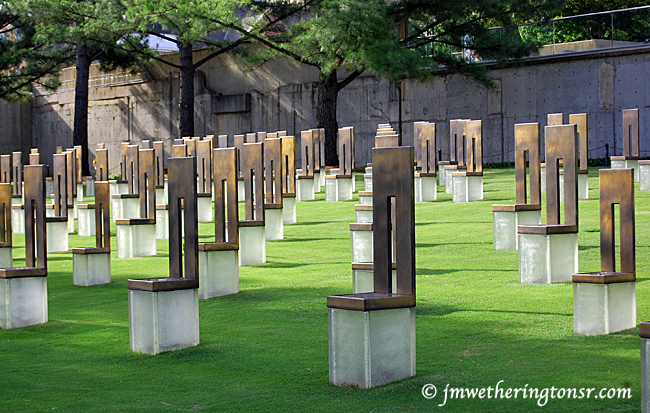 The Field of Empty Chairs. Each of the 168 chairs symbolizes a life lost, with smaller chairs representing the 19 children killed. Arranged in nine rows, one for each of the nine floors of the building, they are placed according to the floor on which those killed were working or visiting, Each bronze and stone chair rests on a glass base etched with the name of a victim. By day, the chairs seem to float above their translucent bases. By night, the glass bases illuminate as beacons of hope. 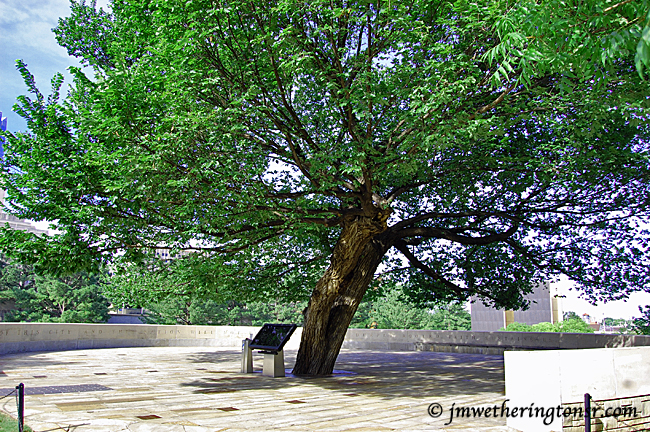 The Survivor Tree is a 90+-year-old American Elm. On the day of the attack, it was almost destroyed in the blast. Pieces of concrete, metal, and glass were embedded by the explosion in the tree trunk and larger limbs, while all of the smaller branches and leaves were blown off the tree. Tender care has allowed the tree to live and flourish, and it now stands as a profound symbol of human resilience. 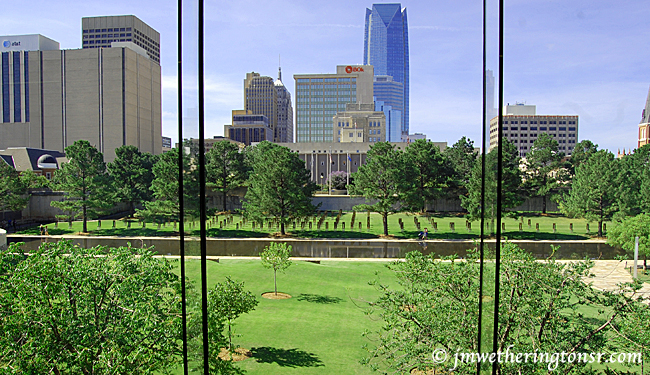 Looking out of the observation window in the museum, you can see the grounds, reflecting pool, Field of Chairs and the Oklahoma City Skyline. 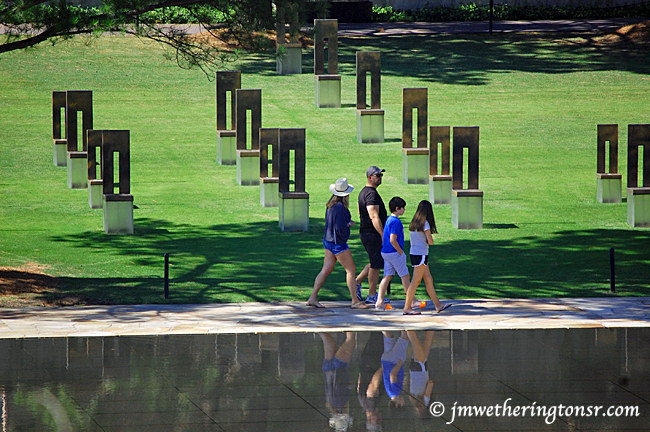 A family walks beside the reflecting pool and in front of the Field of Chairs.