Observances In A McDonald’s

I don’t usually patronize McDonald’s unless my grandkids want to eat there because the golden arches haven’t appealed to me for a long time.

But today, after dropping Cindy off at the DeBary Farmer’s Market so she could have her Mountain Creek Candles booth set up there, I drove to a nearby McDonald’s because they have free wi-fi. I needed to do some bidding on writing jobs, check my RSS feeds, do some research and upload some photos to my new page on 500px.

After about 3 hours I was forced to answer the call of nature. When I entered the men’s room stall and set my backpack down on the baby changing table, I noticed a set of car keys on top of the toilet paper dispenser. After completing my business and washing my hands, I picked up the keys and took them to the counter and told the young lady there that I had found them in the men’s room.

I went back to my seat and set about working again. It was probably 15 minutes later when I felt/saw someone approaching in my peripheral vision and looked up to see a young man walking toward me. He stepped up close to the table and said, “Excuse me. are you the man who turned in my car keys?” as he held up the keys in question.

“I don’t want to bother you.” he continued. “When I asked the girl at the counter if anyone had turned in a set of car keys she handed them to me and when I asked if whoever turned them in was still here she looked around the dining room and pointed you out. I just wanted to say thank you and ask where you found them.”

I kind of smiled and said, “They were on top of the toilet paper dispenser in the men’s room.”

He slapped his forehead and seemed embarrassed when he said, “I can’t believe I did that! I don’t even remember laying them there.”

“No problem,” I said, “we all have those moments.”

“Well, thank you again. Have a good day.” And off he went.

Sometimes when you’re a loner, it’s hard to get in those good deeds because your interaction with others is so minimal. I felt good thinking I got in at least one today with that simple act. 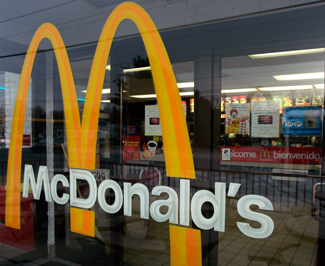 About an hour later I was working away when I heard a crash and an exclamation of “Aw shit!” and looked up to see a man scraping his pancakes off the floor after they fell off his tray when he was walking to a table. I watched him put them back in the styrofoam container and walk back to the counter.

I was kind of surprised and kind of not surprised to hear him tell the young lady at the counter that he had dropped them and would like another order…for free! She was gracious and brought him another order, which was nice but, in my opinion, not warranted.

My thinking is if you bought something and promptly (or even eventually) lost, damaged or destroyed it, why should the seller replace the item at no charge? It’s nice if they offer to do so and most food businesses do that as a matter of course and customer service, but to demand such a replacement due to your own clumsiness is pretty rude.

The icing on the cake was that he was wearing a t-shirt that read, in big, bold black letters, “Let me drop what I’m doing and take care of YOUR problem!”

One thought on “ : Observances In A McDonald’s”