I’m finally getting around to writing about and sharing photos from my trip to the North Texas Comic Book Show – Day Two. You can read about day one, part one here; and day one, part two here. This will be long as I’m trying to fit it all into one post.

The Sunday morning crowd was very, very light when I arrived at 10 am, but you’ll hear no complaints from me. Since I had taken care of the “have to get” items on Saturday, the sparse crowd Sunday allowed me to indulge in a couple of “wants” that I hoped to fulfill. 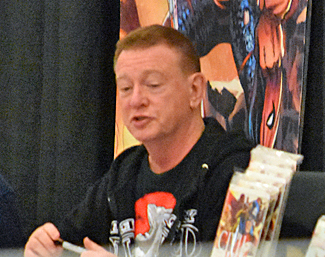 First up was a book and autograph from artist Michael Golden. I first became aware of Mr. Golden back in 1977 when he did some pencilling on the Mister Miracle comic book, but his big claim to fame came when the first Micronauts comic book was published by Marvel Comics in 1979 with him as the artist. He pencilled a variety of Marvel Comics titles throughout the 1980’s, became an editor at DC Comics in the early 1990’s and returned to Marvel Comics as Art Director in the late 1990’s. In the 2000’s he drew covers for several DC Comics titles such as Superman, Nightwing, and Man of Steel. 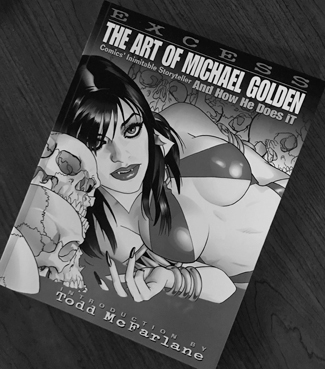 So, the day before I had looked over several books he had for sale, trying to decide which one I would buy to have him autograph. I settled on “Excess – The Art of Michael Golden” and if you follow the link you can see in the photo here that the copy I purchased had a different cover, but it wasn’t the cover that made my decision (I’m sure my brother will say otherwise), it was all the great artwork inside. Mr. Golden kindly autographed it for me, signed the Certificate of Authority form and, since no one else was around, spent a few minutes chatting with me.

Next, it was over to the opposite side of the convention floor where artist/writer Jim Starlin (isn’t that a great comic book name?) had his table. At home in the cabin I have several comic books and books by Jim Starlin, but of course none were with me in Irving, Texas. So while making my way across the convention floor I was looking along the way for a comic book or graphic novel I could purchase to have him autograph. 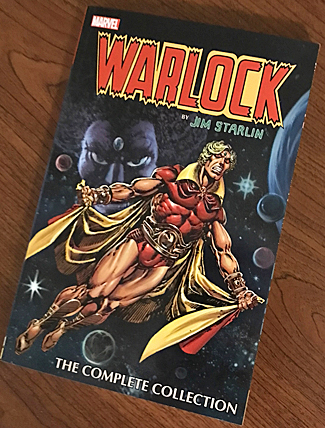 As luck would have it (I’m being sarcastic, it was great product placement) there was a dealer right across from Mr. Starlin’s table selling “Warlock – The Complete Collection” 300-page trade paperback for the unbelievable price of $10! If you’re not a comic book fan you most likely think this is an exorbitant price to pay for a “funny book” (though Warlock, while it does have some humor, is anything but a “funny book”), but the book normally sells for $35, so this was a great buy for me. I asked the dealer (he had 3 more copies on display) how he could afford to sell these for such a low price. He told me he bought a bunch of them from a collector for an unbelievably low price and decided to pass the savings along to other collectors. After I flipped through the book to make sure it was complete (yeah, I’m cynical that way), I paid the man his $10 and stepped across the aisle to Mr. Starlin’s table.

On Saturday, the line at his table had snaked around a third of the convention with people waiting for his autograph. I literally took five steps from across the aisle and walked right up to his table and to the man. He shook my hand, asked where I would like him to sign (while at the same time making an excellent suggestion as to where it would stand out), signed it and thanked me. We were both in a hurry because he was leaving to go speak at a panel and I was leaving to listen to said panel.

The day before, Jim Shooter, Mike Zeck, and John Beatty held a fantastic panel on the first Secret Wars series. Today, Jim Shooter would be interviewing Jim Starlin about his career in comics, his art, his writing, and various memories that they shared while at Marvel Comics. These are the things that fascinate me; the stories behind what we all know (well, fans know) and how many times those stories behind the stories cast an illuminating light on the stories, books, and lives of these artists. The panel was supposed to last for an hour, but Mr. Shooter and Mr. Starlin graciously indulged us for more than an hour and forty-five minutes, using the last forty-five minutes just to answer questions from the large audience.

Jim Starlin on the left and Jim Shooter on the right as they conducted their 90-minute panel at the North Texas Comic Book Show.

And that wrapped up the day and the North Texas Comic Book Show for me. I had a great time, met some great people and got some autographs I’ve wanted but hadn’t had the opportunity to get in the past.

And I lied. I didn’t get it all into this post. I’ll have one more “sidebar” post about some of the other parts of the convention in a few days.