I arrived at the convention center on Saturday for the North Texas Comic Book Show at 8:30 am for a 10 am “doors opening” time. There were already a few people in line to get their tickets, but I already had mine so I stepped outside to get a shot of the exterior of the convention center.

It was 44 degrees outside and the wind was brisk, so I took several quick shots with my “real” camera” and my camera on my phone and then headed back inside quickly to the welcome warmth.

I got in line to exchange my tickets for wristbands and then joined the now much longer line of attendees waiting for the doors to open. I did not spend the extra $20 to get in an hour early, but later I would wish that I did. 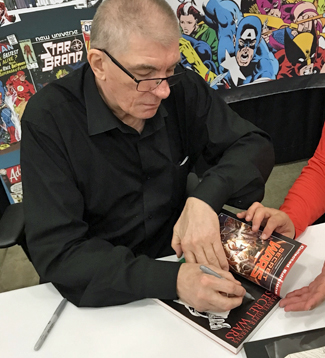 I finally entered at 10:02 am and immediately went looking for the line where former Marvel Comics Editor-in-Chief and writer for the Marvel Super Heroes: Secret Wars series, Jim Shooter, was signing. After standing in the very long line for about an hour (the last 15 minutes of that spent enjoying conversation with Mr. Shooter as he talked to the two men in front of me and myself while he signed their books), I finally stood in front of him and presented my book and a couple of prints I purchased for his autograph. He kindly signed a dark interior page of my book with a light marker, then the prints, and then the Certificates of Authority (COA’s) to prove he signed said items, should I ever wish to sell them. He graciously shook my hand, said it was a pleasure meeting me and hoped I would have a good time at the convention.

Fortunately, the other two men who were the artists (penciller and inker) on the series were right next to Mr. Shooter, so I quickly got in the short line for Mr. John Beatty, the inker on the series. I only had to wait about 15 minutes and then got so involved in talking to him that I forgot to take a photo of him signing the book and COA’s. I took note of the fact that Mr. Beatty purposely left a space between Mr. Shooter’s signature and his (also in a light marker on the dark page) so that the penciller, Mr. Mike Zeck would have room to place his, holding the usual order of credit appearance as writer, penciller, inker. 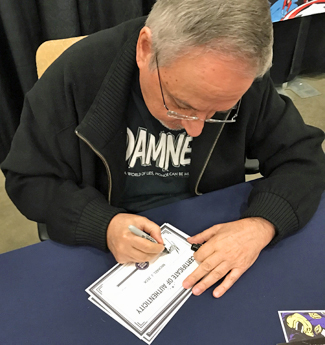 Then it was over to the line for the penciller of the series, Mr. Zeck. The wait in this exceptionally long line was about 45-50 minutes. I’ve always liked Mr. Zeck’s art so I picked up a print of a Captain America drawing he had done that I had admired for years to have that signed as well. We only spoke for a few moments while he was signing, because there were a lot of eager fans behind me who were also waiting anxiously for a chance to have their various books and prints to be signed.

So, after 90 minutes waiting for the interior doors to open and then another 90 minutes in line to get the three most important autographs I wanted from this show, I considered the paramount purpose of my visit to have been accomplished and could take time to enjoy the seller booths, artist alley and panel discussion that were to come over the next two days. 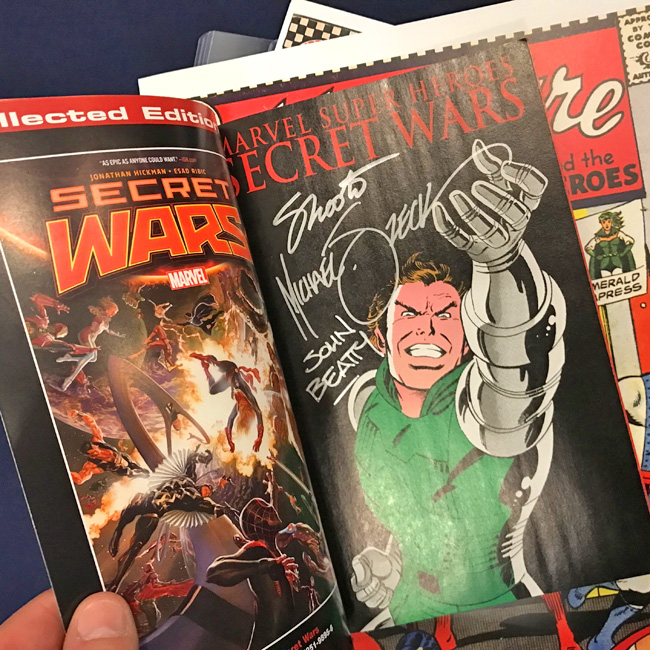 I’ll write and post about the rest of the show over the next few days, but here’s a panorama shot of the floor on Day One from the top of the bleachers.

One thought on “ : North Texas Comic Book Show – Day One”