Norman Rockwell has always been numbered among my favorite painters. One of the best gifts I ever received was from my brother when he gave me a 2-volume set of books collecting Rockwell’s paintings, and one of my favorite museum visits was to the Winnipeg Art Gallery in Canada back in 2011 to see their Norman Rockwell exhibit.

Among Rockwell’s most famous paintings is one usually referred to as his “Thanksgiving Painting”, depicting a group of family and/or friends gathered for a meal that features a turkey being brought to the dining table by the matriarch and patriarch of the home. But the actual title of the painting (which appeared in the March 6, 1943 issue of “The Saturday Evening Post”) is “Freedom From Want” and was part of a group of four paintings inspired by and named after President Franklin D. Roosevelt’s State of the Union address in 1941 that listed the “Four Freedoms” that people all over the world should expect. They were:

And here is the painting. 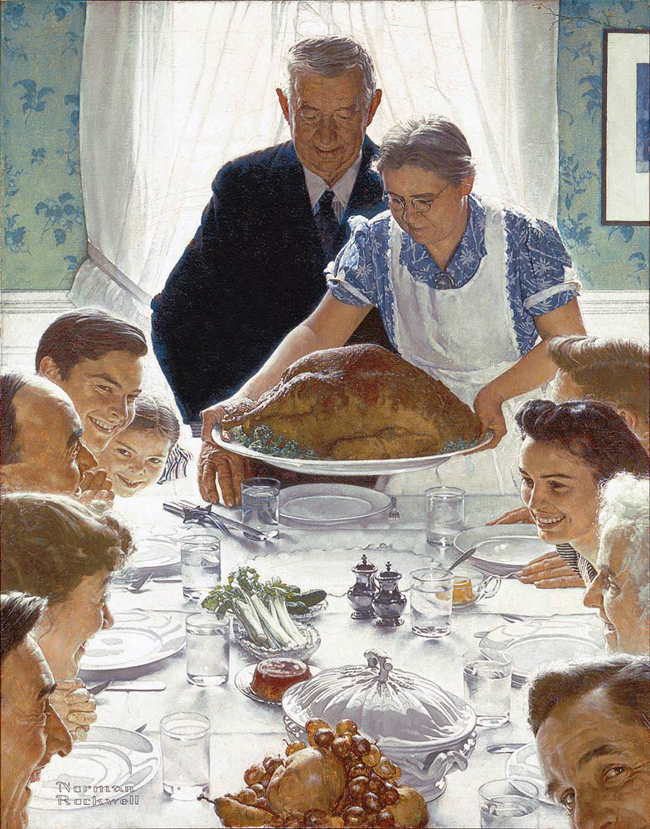 Through the years, Rockwell’s iconic painting has been adapted, parodied and satirized many times. This site gathers 40 of the best parodied images of “Freedom From Want” and some are really funny. My favorites are the Charlie Brown version (even Woodstock is included), the JSA/JLA version (Power Girl has larger breasts than the turkey she’s presenting), the Metal Men version, the Batman 1966 version, and the Doomsday Preppers version.

Which are your favorites?