“My Next Guest” with David Letterman

Saturday , 13, January 2018 J.M. Wetherington Sr. Television Comments Off on “My Next Guest” with David Letterman 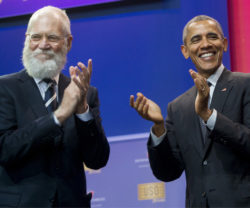 I just finished watching the first episode of the new Netflix series, “My Next Guest Needs No Introduction – with David Letterman” with former President Obama as his inaugural guest and I truly enjoyed the entire show. It was fun, poignant, and entertaining. My only wish is that it had been longer (because you could obviously tell that it had been edited down for length) so that there would have been more to savor.

And, after seeing David Letterman’s, as former President Obama described it, “biblical beard” I’ve begun to seriously entertain the thought that I might grow mine out like that as well.