Netflix Reboot of Lost in Space 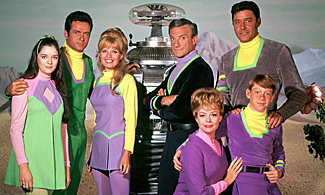 Netflix just announced that they would be releasing their reboot of Lost in Space which will begin streaming on April 13, 2018.

As an 11-year-old growing up in the space age of NASA’s Gemini program and science fiction movies, I loved Lost in Space when it first aired, especially because it had a kid about my age going along for the ride. Unfortunately, the series devolved into silliness rather quickly and the following year, Star Trek supplanted Lost in Space for me.

The 1998 movie version was never a favorite of mine either.

Here’s the trailer Netflix released. I will admit to feeling a bit of a tingle when we hear a robotic voice warn, “Danger, Will Robinson!” and I’m sure I’ll give it a try when it debuts.