My Favorite Comic Book Artists is a series of posts about my favorite comic book artists through the years; why I liked them and a little bit that I may know about them. Nothing fancy, just a look back at some of my favorites. 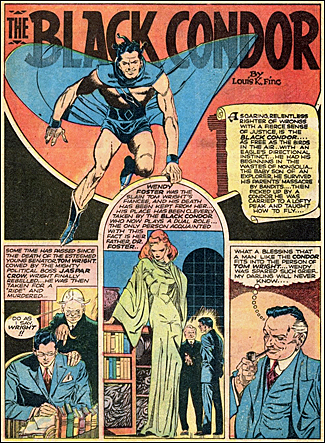 When I was about 11 or 12 I came across a reprint of a comic book from the 1940’s called “The Black Condor” and fell in love with the artwork I found inside. At this point in my life I had been reading superhero comics, mostly DC (think Superman, Batman, Justice League, etc.) and Marvel (Spider-man, Fantastic Four, Avengers, etc.) since I was 7 or 8 and this was one of the few comic books where the art truly seemed to almost leap off the page with its action scenes.

At this point in my young comic book loving life I could recognize the art of a few artists that I had grown used to seeing on a regular basis like Steve Ditko in Spider-Man, Jack Kirby in Fantastic Four and Wayne Boring and Curt Swan in Superman, but that was about it. Being a reprint from the 1940’s, the artist in The Black Condor story was, of course, unknown to and unrecognized by me, but I really liked what I saw in those panels. 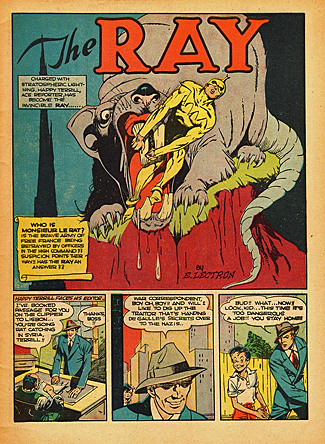 A few months later I found a reprint of a comic from the same period named “The Ray” and immediately recognized the same artist by his distinctive style. That would be the last time I would ever see the art of Lou Fine until the advent of the Internet some 30 years later, long after he had passed away, but I would never forget his art through those years.

The best way I can describe his art is the word “dynamic” because at the time, with the except of a few like Ditko and Kirby, most comic book art was static or still in appearance. But the word “graceful” also come to mind as that was the feeling I got when looking at his drawings, especially the fight scenes. Most comic book fight scenes were only discernible by a swing fist and a sound effect of “Bam” or “Thwok” and drawn lines of impact to indicate a punch had connected. Fine’s fight scenes showed the whole body moving to punch or reacting to a punch. 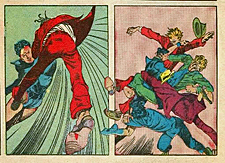 Here’s a short little video about Lou Fine and they are absolutely right about one point; I was always drawn to comic book artist Gil Kane’s work in the ‘60’s and ‘70’s because it reminded me of Fine’s art, though I never knew that Fine had such an influence on Kane until many years later.