Lunch At The Pisgah Inn

Sometimes, things just work out for the best, even when you think they won’t.

Cindy’s mom and dad are visiting us this week here at Wolf’s Haven and yesterday told us that they wanted to take us to lunch today at The Pisgah Inn, on the Blue Ridge Parkway at the base of Mt. Pisgah. They also invited our mutual friends, Rebecca, from nearby Waynesville and Kate, from Asheville, to join us and we all agreed to meet in the dining room lobby at the appointed hour of noon.

We arrived about 5 minutes after noon to find Rebecca waiting…along with what seemed to be the entire population of North Carolina. The Pisgah Inn is a very popular dining choice, both for its food and its spectacular view of nearby mountains from its 5,000 foot elevation. We were kindly informed that it would be an hour’s wait. And because it’s The Pisgah Inn, we gladly waited.

We passed the time waiting for Kate to arrive; watching as 15 minutes, 30 minutes, 45 minutes and more crept by. Still no Kate. One of the unfortunate facts of The Pisgah Inn is that AT&T (our carrier) has absolutely NO signal availability in the area. One of my father-in-law’s 3 cell phones (don’t ask, lol) uses Verizon, but he could only get a minimal signal from them. The effect being that we could not call Kate, nor she us.

Finally, we were called in to a waiting table and the general consensus was that Kate had either forgotten the lunch date or that something had come up which prevented her joining us. We sat down at the table and as Robert the server began informing us of the lunch specials, who should appear at the table but Kate! We were all so happy and boisterous in exclaiming our pleasure at her arrival that poor Robert had to go silent and just wait for us to finish. Though late, because of the delay in being seated due to the heavy throng of diners, Kate ended up arriving just in time.

It turned out that Kate’s GPS had taken her the long way from Asheville to us, routing her over to Cherokee and up the BRP through the furthest western leg. She had called, but of course none of us could receive her calls.

For the next 90 minutes we had a wonderfully delicious lunch with a beautiful view and even better conversation between the 6 of us. Thanks again to Cindy’s mom and dad for treating us all to lunch at The Pisgah Inn! 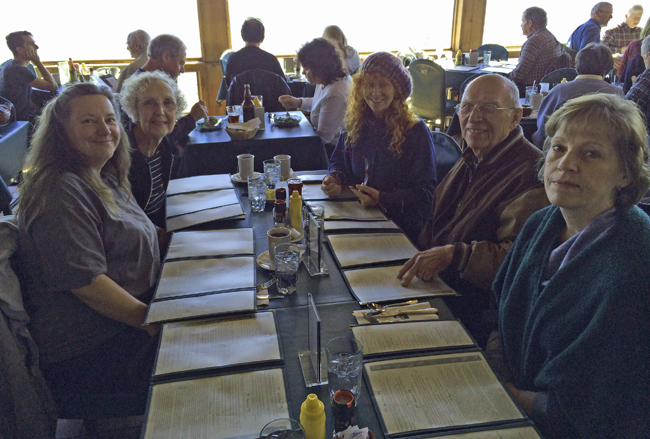