Busy at work and busy in my personal life. Let’s get to all the things on my mind today. 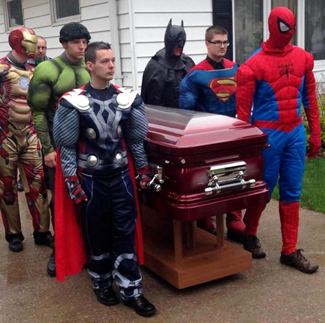 My heart was touched when I read this story and saw this photo about a little 5 year old boy who passed away due to cancer and his parents decision to dress as his favorite superheroes at his funeral. As a lifelong comic book fan, I think it was just great that his parents honored his memory and his love of superheroes (from the two major comic book companies) by doing this. Go read the rest of the story and look at the other photos.

Google+ started a new feature today called “Stories” where they take the photos and videos you’ve uploaded (either manually or by using the auto-backup feature on your smartphone or tablet) and arrange them into a type of living album or presentation. Here’s a couple of mine that I edited and shared this evening. First one is some photos from Maggie Valley, Waynesville and Sylva in April of this year and the second one is photos from Maggie Valley and Cataloochee Ski Resort last October. Look for others as I add them.

In my personal writing, I started a new story today. I’m interested in seeing where this story will go. I mean, I know how it ends, but it will be fun to see where the trip goes on the way to the end. I’ve already had some fun in it and was already able to play with some situations that allowed me to make fun of some things that have been bothering me. It’s my first time trying to write what I hope will be a recurring character, and I’ve even had fun with the character’s name. But I’ve only just started, so we’ll have to see if it can become what I’d like for it to become.