Today marked an auspicious event in my oldest grandson’s life. This long-time listener and observer of world and American politics exercised the rights afforded him by turning 18 years of age back in June of last year and became a first-time voter this morning during early voting in Florida. He’s been eagerly awaiting this opportunity for a long time.

I’m especially pleased that exercising his right to vote is important to him. I know that, for some people, it is not. And I even understand some of their reasons for that. 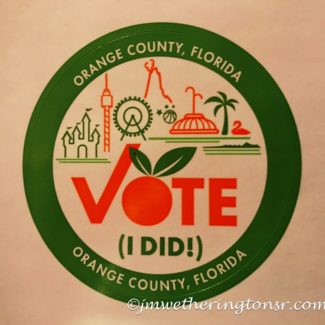 Mikey doesn’t like to have photos taken of himself, but I asked his mom if she could try and get him to let one be taken of him this time for the importance of this occasion (and yes, so granddad could see his oldest grandson voting for the first time) and thankfully he agreed. The only stipulation was I could not share it on social media, so I can’t show it to you. But he looked very proud holding his “VOTE (I Did!) sticker in front of the polling place, and I’m proud too.