This is my last weekend in Arkansas and today was my last day to get a chance to visit the William J. Clinton Presidential Library and Museum in Little Rock. I’ve never visited the official library and museum of ANY American President, so it was fitting that the first one I visit belong to one of my favorite Presidents.

I tried to visit it last Saturday, but Little Rock was in the midst of their Riverfest celebration and it was too much of a mess to try and get there, what with road closures for the Riverfest AND a 5K run that was taking place on the street right next to the Library and Museum. And Sunday’s are out because the place is only open a half day, from 1 to 5, (this IS Arkansas after all, the buckle of the bible belt in America) and I try to relax as much as possible on Sunday before the work week begins.

So, I arrived this morning about 10 minutes before the doors opened at 9 and did a little looking around on my own before the official tour began at 9:30. Amazingly, Bill himself was our tour guide, but it was Bill Jacobson, not Bill Clinton; though Mr. Jacobson is a friend of the former President, having met him at Yale and worked for his presidential campaign. Here’s a picture of the exterior of the building. I’ll try and post an album of more photos as soon as possible. 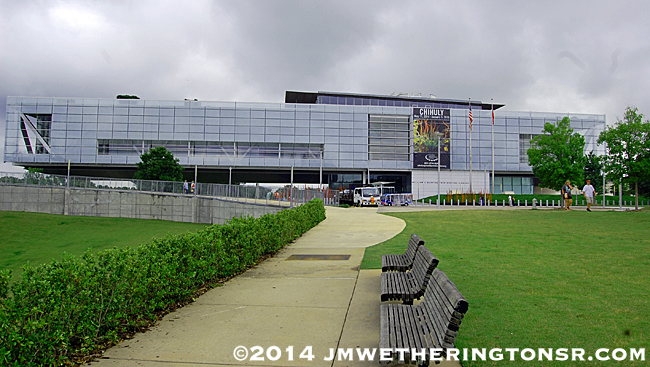 I needed this today. I needed the good feelings I felt gazing at the memories and exceptional public service of a man who personified one of the best presidencies, in my opinion, of our country. I needed something positive in my head to drive out the rancor and disaccord that has accumulated this past month. This deployment has been one of the most unpleasant I have ever been on, for a variety and combination of reasons. That is not to say that we have not done magnificent and wonderful things on this mission, because we have. We have faithfully and with all our many skills assisted those who survived the horrific tornado of April 27, 2014, so please do not think my words are in regard to the good work all of us have accomplished here in Arkansas. But my time here just has not been good for my disposition, so my spirits were lifted today by the life and service of a man who, like all men is imperfect, but who exudes those qualities we all aspire to.