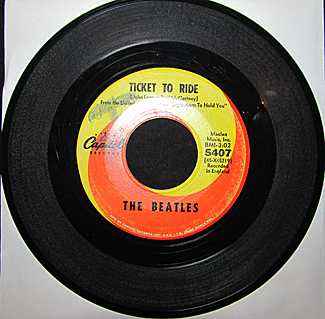 It wasn’t the first flat record – that honor belonged to the old 78-rpm, which had been around since the late 1880s. But the 78 was big – about 10 inches in diameter – and because the grooves were wide and it spun around fast, you couldn’t fit much music on one side. It was made of a brittle, thick shellac and broke easily if dropped.

Still, it was the standard for recorded music for almost 70 years.

In 1948, Columbia came out with a much slower-speed disc, the 33-rpm record, otherwise known as the LP (for “long-playing”). At a foot in diameter, it was even bigger than the 78, but it held much more music – up to an hour’s worth. Its grooves were only one-fourth the width of a 78’s grooves, and the needles were finer. The 33 was made out of vinyl, which was more flexible and made the records more durable. Because the 33 could hold multiple songs, it came to be known as an album.

But RCA developers realized that people might not always want to buy a whole album of songs. They came out with the 45-rpm “single” which contained just two songs: the A-side, which featured the song that the studio predicted to be a hit; and the B-side, which was just a bonus. Jukebox makers quickly abandoned the 78 format for the seven-inch 45, because you could fit more records into one jukebox. The smaller, cheaper format was popular with teenagers, who couldn’t afford albums, and the rise of the single coincided with the rise of rock-and-roll music.

I remember asking my parents for a portable record player when I was 10 or 11. We had a big console stereo in the living room that played 33-rpm and 45-rpm records and had an AM-FM radio and the thing was a monster in size as far as length goes (though it was only 3 to 3 ½ feet high), taking up a good portion of one wall. 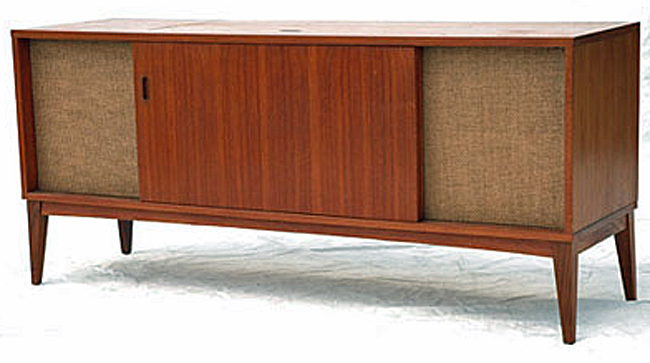 Ours was a darker colored wood (Cherry, maybe?) but looked almost exactly like this.

It was a major piece of furniture in our home. 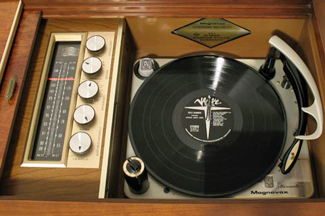 The control/player until inside looked just like this, with the AM/FM tuner and volume, bass, treble and balance control knobs on the left and the record player on the right. Note the 45-rpm adapter on the lower left of the turntable.

The best thing about it was the sound, it was full range and loud. You could crank that thing up and hear it all over the house and into the front yard. I remember that it had a 45-rpm adapter, a circular tube of plastic that you would slide over the smaller 33-rpm player spindle so you could insert the larger 45-rpm record opening over it, but I wanted to play records in my room and so asked for a portable record player, even though the sound from the portable was thin and almost tinny sounding. And you could only play one record, whether it was a 33 or a 45,  at a time on the portable, as opposed to being able to stack them on the console stereo.

I laugh now when I think how we called that “portable” because it was like carrying around a typewriter (anyone remember those?) case or a hard-sided suitcase, but it was preferable to strapping the living room stereo unit to your back and carrying it around. I imagine one day our grandkids will be carrying around their music in a pin-sized device and laugh at us for thinking our iPods or iPhones were portable.

But now you know that today is the birthday of the 45-rpm record, even though you may never have played one in your life. 🙂