It’s day two of our 21st Wedding Anniversary Week where we take the Boeing Future of Flight tour in Everett, Washington and hike through a small part of Mt. Rainier National Forest.

You can click here to read about day one. 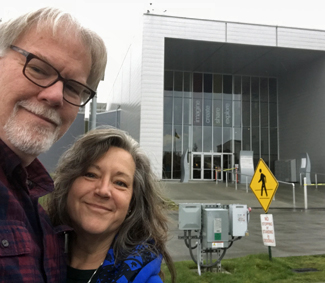 We had a good night’s sleep, enjoyed breakfast at the hotel, and then drove from Redmond to Everett for our scheduled 10 am tour of Boeing’s Future of Flight facility at Paine Field, a small international airport next to the assembly building. In the photo to the right, we are about to enter the visitor center where the tour begins and this is the ONLY photo we were permitted to take. Just inside the doors behind us are dozens of lockers that you MUST leave your belongings (aside from medications) in because “still photos and video cameras, electronic devices (mobile phones, cameras, pagers) and personal items (purses, bags, backpacks) are not permitted on the Boeing Tour” due to security reasons.

This is the only publicly available tour of a commercial jet aircraft assembly plant in all of North America. The assembly building holds the Guinness World Record for being the largest building (by volume) in the world at 472,370,319 cubic feet and sits on 98.7 acres of land. The Boeing Company’s 747, 767, 777, and 787 aircraft are assembled at this site and they currently produce 2 ½ completed aircraft per month by 40,000 employees spread out over 3 shifts. 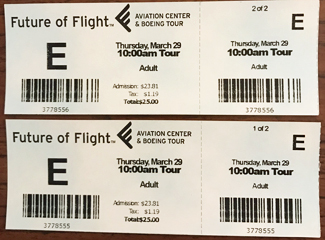 The tour lasts about 90 minutes and was fun and informative. There was an introductory video in a theater at the visitor center before we were loaded onto a bus to drive over to the assembly building. We started on the nearest side (the assembly building is divided in half and two kinds of aircraft are assembled in each half) where the 747 and 767 aircraft are assembled. Our tour guide was full of interesting facts about the aircraft, the facility, and the people who put these massive mechanical marvels together. While Ransom E. Olds originated the assembly-line process and Henry Ford put it into mass practice, Boeing has put it into practice on a monumental scale and continues refining it to this day. 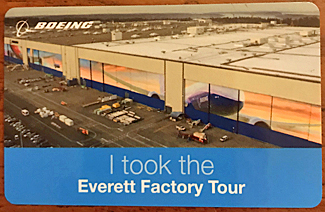 We then visited the farthest side where the 777 and 787 aircraft are assembled and were fortunate enough to see a massive overhead crane in the ceiling moving a part of a plane into place. Afterward, we took a quick ride on the bus past a line of completed aircraft parked on the edge of the airport taxiway. Boeing test pilots take each finished aircraft on two different flights and then test pilots from the purchasing entity (Delta, American, etc.) also take each plane on two different flights. If any issues are discovered they are corrected and tested twice again before the aircraft sale is considered final. And Boeing does not deliver aircraft; each purchasing entity is responsible for flying their own aircraft away from the assembly plant upon completion. 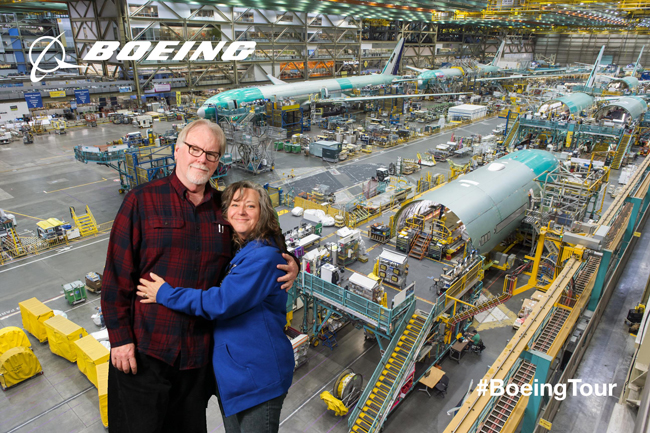 After getting some souvenirs from the gift shop, we headed to lunch at a nearby place called The Lodge Sports Grille and split a nice soup and sandwich meal. Then it was back to Redmond to meet up with Jeremy, Wendy, Jade, and Maxwell for our drive to Mt. Rainier National Park,

Our goal had been to drive as far up Mt. Rainier as possible and get some photos like I did when I was there in May last year, but I didn’t realize that coming in from the northern entrance we would not even get to the mountain itself, just the mountain base area. That worked out fine though because it gave us all the opportunity to hike around in something you wouldn’t expect to find near a snow-topped mountain; the rainforest loop trail.

Here we are at the trailhead. 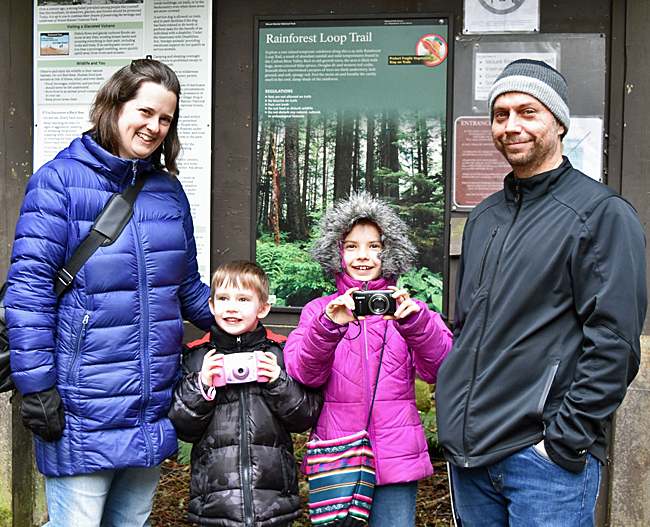 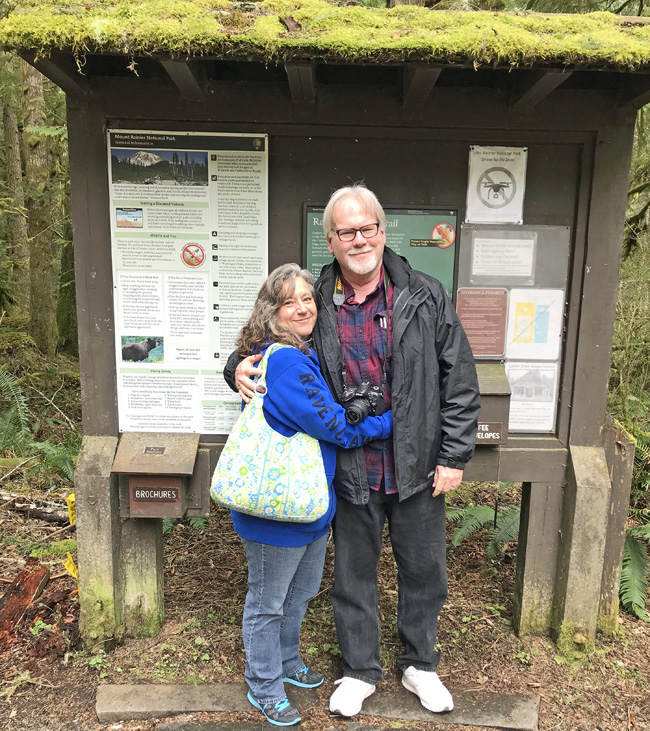 So the loop is a short quarter mile trail with some pretty fascinating sights, considering you’re a Southern boy in the Pacific Northwest in March. But we ended up hiking much farther because Cindy decided it would be fun to hike UP the trail to see where the waterfall originated from. It was still fun. 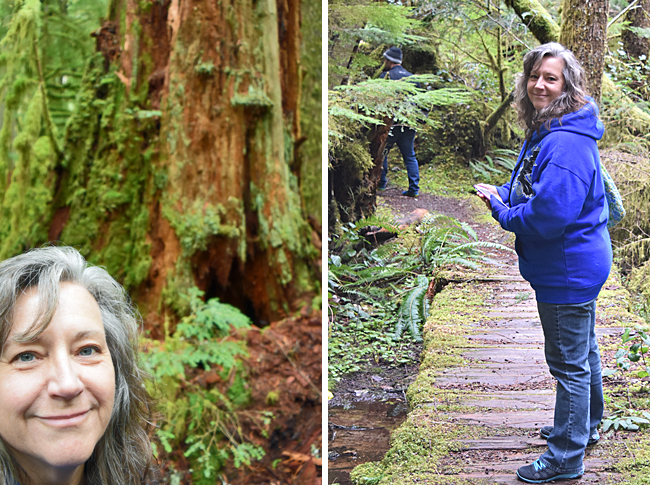 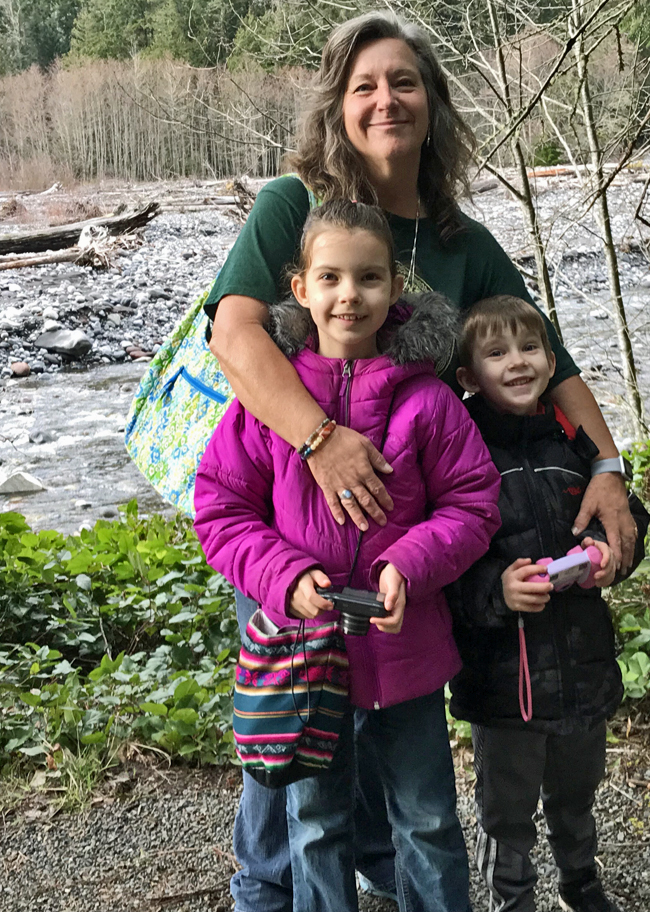 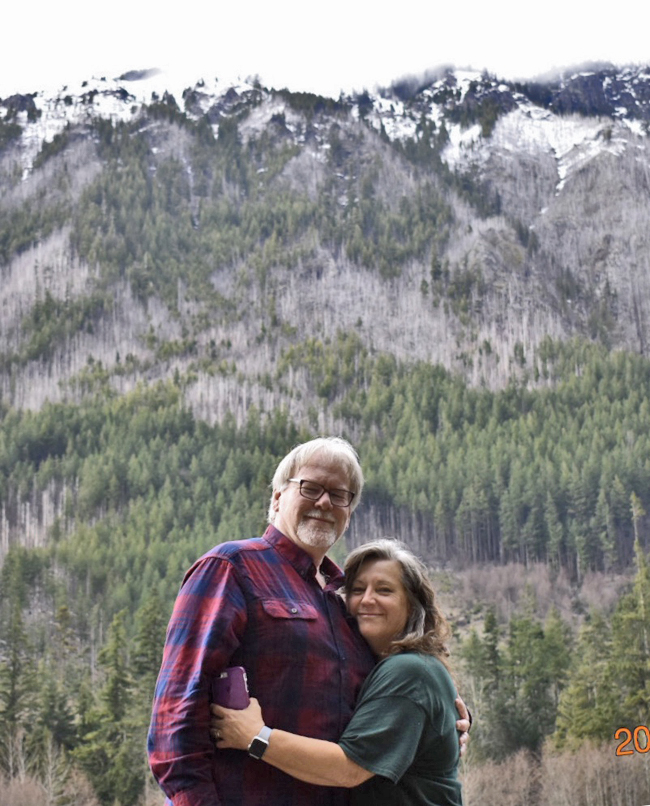 On the way back to Redmond, Jeremy and Wendy treated us all to dinner at Woody’s Drive-in where we enjoyed delicious burgers, fries, and shakes before arriving back at our hotel where we collapsed.

Another early day tomorrow as we drive to Vancouver.