It’s a Calvin and Hobbes Day! 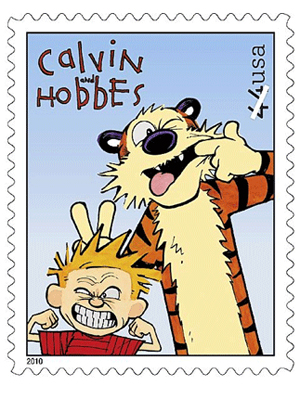 I’m a huge Calvin and Hobbes fan, though it wasn’t always that way. The first time I saw the strip I thought it was the worst piece of drivel I’d ever seen on a comics page. But every day it would still be there when I turned to read the comics and I would glance at it, then read it. At some point I began to be amused by it and not long after that it became the first comic strip I turned to each day in the newspaper.

Today I own several of the collected editions in paperback and the Complete Collection in the matching two-volume hardback edition mentioned in point number 3 of this “7 Things You Might Not Know About Calvin and Hobbes” article over at Mental Floss.

And, Calvin and Hobbes creator Bill Watterson was pretty adamant that he never wanted the comic strip to progress to an animated cartoon like “Peanuts” or “Garfield”, but this fan couldn’t resist the urge to animate the boy and his stuffed tiger, even if it is for only 30 seconds.