As I mentioned in Part one of “I’d “Sooner” Not”, driving around Oklahoma City has brought back memories. Here is another early one of our time when we first arrived here 38 (or maybe it was 39) years ago.

During one of the early days of my arrival here in June, I was driving to an office when I saw something very familiar, but also very different. As I drove past it I realized it was the drive-in restaurant where I had my first job when we first arrived in OKC. It was a different name, but the exact same layout and location, even though many things around it were different. A few days later I was in the area again and this time I stopped to take some photos.

The sign now reads “Charcoal Oven” but it used to be Bonaparte’s Drive-in in the late 70’s and that multi-story building behind it wasn’t there at the time. To the left, behind the silver or gray car, you can see the “restaurant” building which was just a kitchen, line prep area, pick up window, office and storage rooms. You would drive in on this side of the sign, pick up your order and drive out or park on the other side of the sign. On busy nights, the line of cars waiting in line on the street would block cars from pulling out onto the street unless someone was nice enough to leave a space at the exit.

My first job in OKC was as a night manager at a popular, local drive-in only restaurant named Bonaparte’s Drive-In. Back in the late 50’s and early 60’s its main claim to fame was that you could drive through, order your food and then park under a covered area and young ladies in skates would deliver your food to your car on one of those trays that hung off the car’s door and you could sit and eat and talk with your passenger(s). The menu was a standard one of burgers, fries, onion rings, cokes, and shakes.

By the time I arrived in the late 70’s almost everything was the same except the young ladies would just walk your order out and a new menu item had been added a few years before; fried pickles. I’d never heard of such a thing, but they were a huge hit in OKC. The general manager, a nice guy named Jim Riley, was also experimenting in the kitchen with another new (for this establishment) menu addition; fried chicken. Jim managed the place during the day and I managed it at night, but we had about an hour overlap in our schedules and he was training me in how to cook his fried chicken in a sort of high-tech (for the time) pressure cooker/fryer machine.

Friday and Saturday nights the line of cars waiting to get in extended out the property and a half-mile or so out into the street, which was called N.W. Expressway, a four-lane street separated by a median strip. We didn’t close until 2 or 3 am on those nights and the bulk of our business at that time of the day (night? morning?) came from local bars that had closed at 1 or 2 am, if I’m remembering the times correctly.

Jim finally got the process down for cooking his fried chicken and when we added it to the menu I tapped into my negligible drawing skills to produce a cartoon image of him holding a drumstick up in his right hand while wearing a superhero-style spandex suit, complete with cape, and a large “C” overlapping a large “R” for Colonel Riley on his chest as his left arm clutched a handleless bucket full of chicken to his side. He seemed proud of that drawing and hung it in the office area for all to see.

I also suggested we put on the drive-in marquee “Come try Colonel Riley’s NEW Fried Chicken, Best in the City” which he did but one day later the lawyers from Kentucky Fried Chicken (which had a restaurant about a mile down the road) called and the owner of Bonaparte’s said we had to take down the “Colonel Riley” portion, lol. You can guess why.

I had started working there in July or August and I was still there by the time winter rolled around. I was sitting in the office one night doing paperwork when one of my crew suddenly said, “Hey look, it’s snowing!” and I looked up from the desk and out the window to see that it was indeed. That was the first time I had seen snow in person and not on TV or a movie. I was pretty excited.

That excitement certainly faded once I saw the dirty, nasty mess the white snow had become the next day. And it completely lost its appeal when our car broke down and we had no extra money to buy the parts for a few weeks and I had to walk the 5 miles from our apartment to the restaurant and then 5 miles back. A few days later my shoes had holes in the soles, so I had to put on a pair of socks, then wrap my feet in empty plastic bread bags, then put on another pair of socks so I could walk to and from work through the snow and ice without my feet getting soaking wet, They were still freezing cold, but at least they were dry. I would take off the outer pair of socks and hang them in the office to dry while I was working and then put back on the bread bags and now damp socks to walk back home. 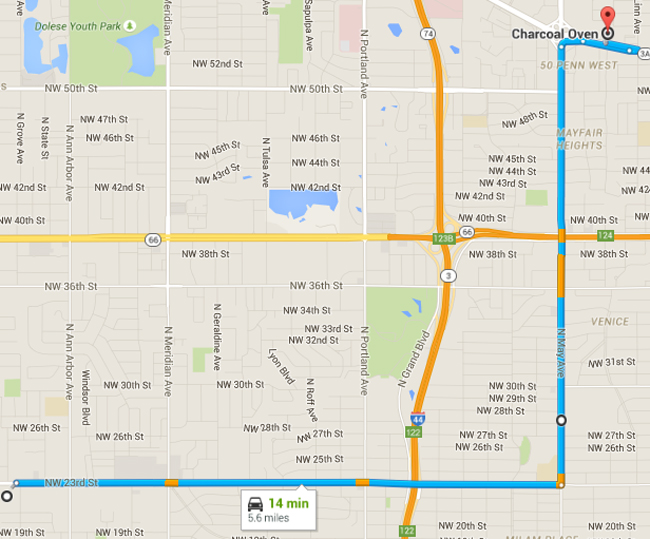 Today, as you can see from the photo above, the place is called “Charcoal Oven” but everything, from the outside at least, looks the same. Of course there are LOTS of additions and changes to the area during the past almost four decades. Where I parked next door to take the photo above used to be a Shakey’s Pizza, but today is some kind of credit union office. N.W. Expressway expanded from 4 lanes to 8 lanes and there are SO many more businesses along the street than there used to be.

I looked online for photos of the old Bonaparte’s sign, but had no luck in finding any. I did come across this post in an online forum; “bonapartes closed down in ’84/’85, they had a big blowout on the last night, had cars from all over the state lining the street to get in.”

This is probably the end of the “I’d “Sooner” Not” posts because sometimes going back is just not what we need to do. But thanks for reading!