Hiking up to Chimney Rock was fun and we had some great views, but there was still more to do at Chimney Rock State Park and new heights to climb that were even higher than Chimney Rock.

After we came back down from Chimney Rock, Amber suddenly realized she had dropped her glasses and went looking for them while Cindy and Abby walked over to the snack area to sit in the shade and cool down. I, on the other hand, decided to hike even higher than the 315 foot tall spire at an elevation of 2,280 feet that we had stood on where the flag was located, after Amber assured me she did not need any help looking for her glasses

First stop is up to Devil’s Head, which is probably 75 feet higher that where we had been. That doesn’t sound like much, but the wooden stairs up to it are almost straight up at switchback angles. At about the halfway point on the steps, you can stop and get some beautiful shots of the spire and people on it below. 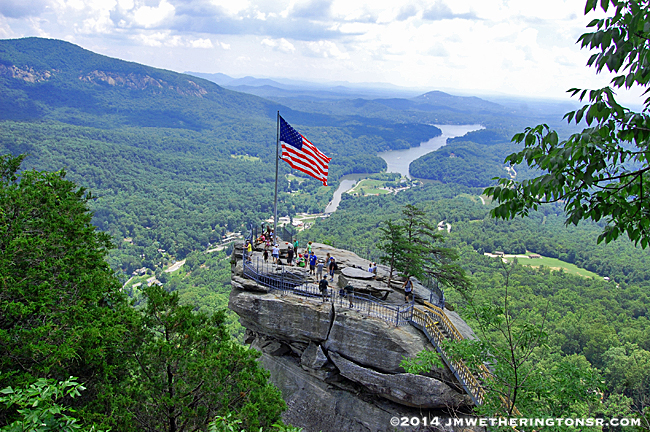 Halfway up to Devil’s Head I stop and take this shot of where we had all just been a few minutes earlier. 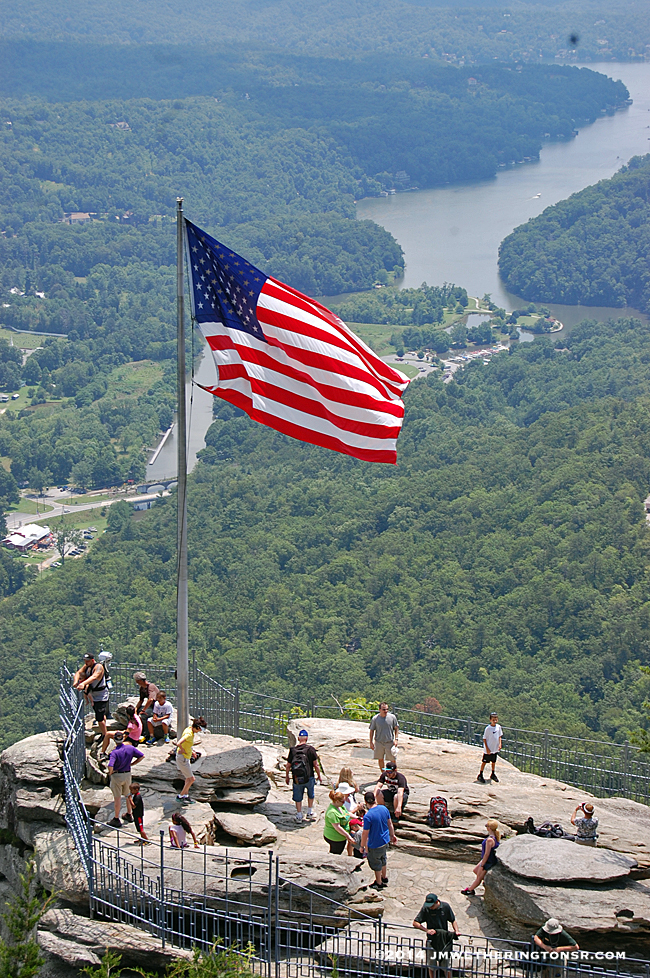 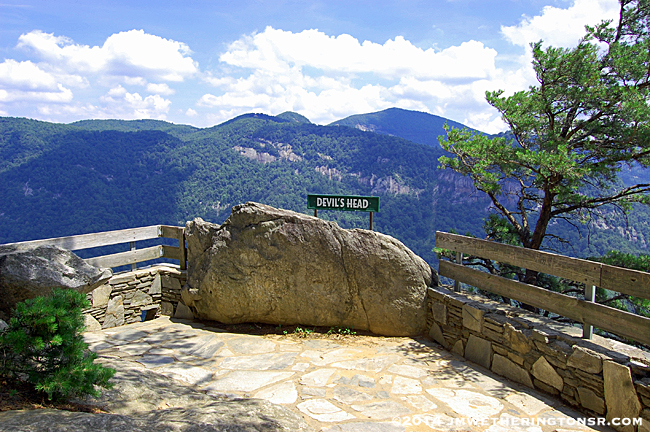 Walk out to the end of this outcropping, look to your left and you’ll be greeted by the sight of The Devil’s Head.

The Devil’s Head is what is known as a balancing rock (also called balanced rock or precarious boulder), and is a naturally occurring geological formation featuring a large rock or boulder, sometimes of substantial size, resting on other rocks, bedrock or on glacial till. The Devil’s Head rests on a cliff and looks like it should topple off at any moment. 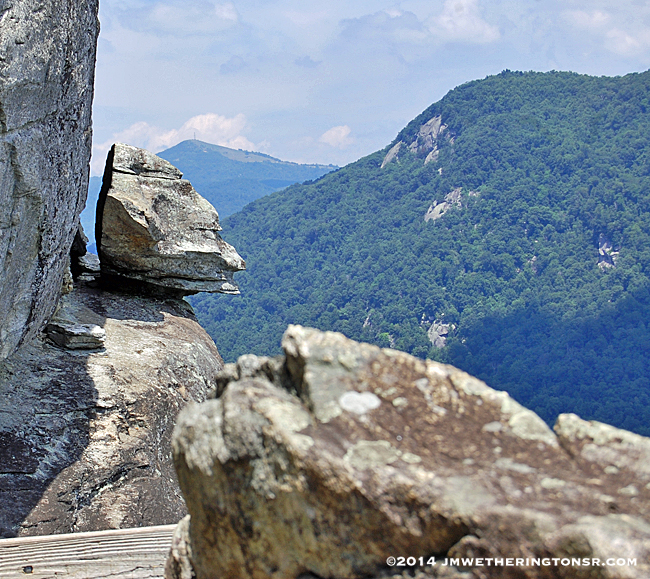 Can you see The Devil’s Head?

After Devil’s Head, it’s another 125 feet or so up the very highest point on the mountain, known as Exclamation Point. Like the steps to Devil’s Head, it’s straight up, but instead of wooden steps (there are a few) the majority of the trail is flattened rock steps at irregular intervals, dirt trails and trails of gravel through brush and trees. I was glad to see I wasn’t the only one who had to make several stops to rest along the trail. 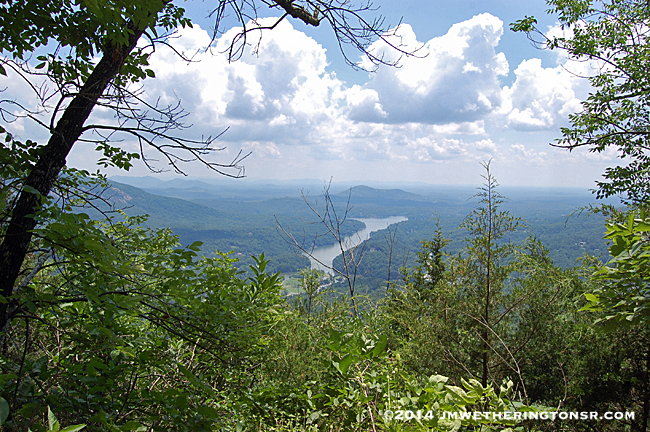 Stopping partway up the trail to Exclamation Point, you can still see Lake Lure but the trees below are now obscuring the rock spire with the flag.

Reaching the top, which is 2, 480 feet in elevation, is very much worth it, whether you’re happy to have conquered the trail or to enjoy the view, or both. 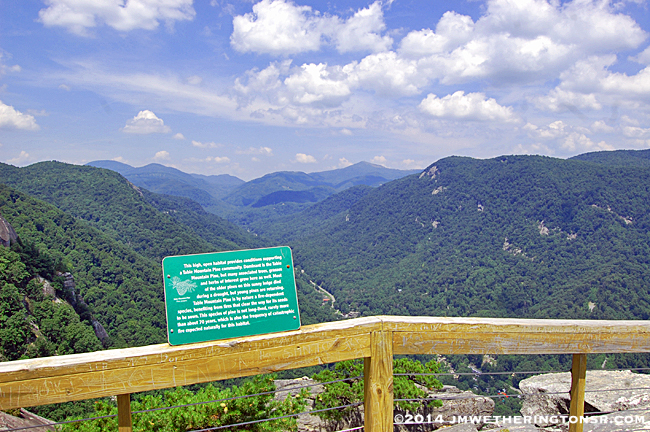 The view from the top is amazing. 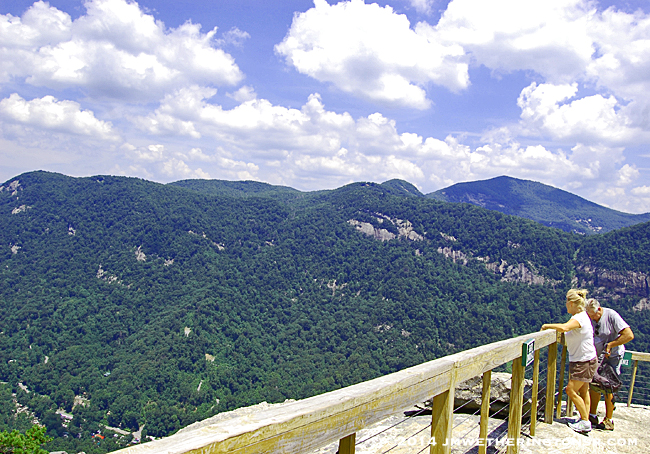 Another shot with people in it to show the perspective of man to mountain.

I was exhausted when I reached the top and spent several minutes just enjoying the view and the breeze while I recuperated. Getting back down was easier in some ways but harder on the old knees in other ways. But, we’re not finished yet at Chimney Rock State Park. In fact it’s not even lunch time yet and we have more hikes to take.