Today is National Dog Day, observed by those of us who love our own dogs and/or any dog. 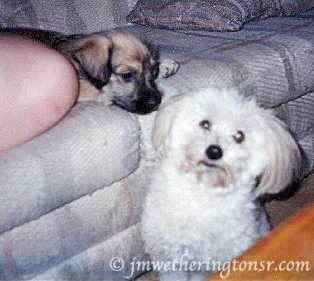 a picture of our beloved Wolf in March of 2000 when he was a puppy and our sweet Noise. Cindy already had Noise when we met in 1996, but in 2000 she wanted another puppy for Valentine’s Day. Wolf turned out to be quite a different breed than we were told, but by the time we found out it was too late; we had fallen in love with him, weird looks, behavior, and all.

Next month will mark 5 years since Wolf passed away at our cabin in 2010. It sounds strange to say it, but losing him was like losing a member of our family, but then maybe not so strange because he was in every way. I wrote about that horrible day a couple of years ago.

Noise was back with her original owner, Cindy’s son and his family, when she passed away a few years ago. She was such a sweet girl and so adorable. She accepted Wolf when he arrived as a puppy, and she accepted my grandmother’s adult cat, Squeaky, when we brought her home after my grandmother’s passing. 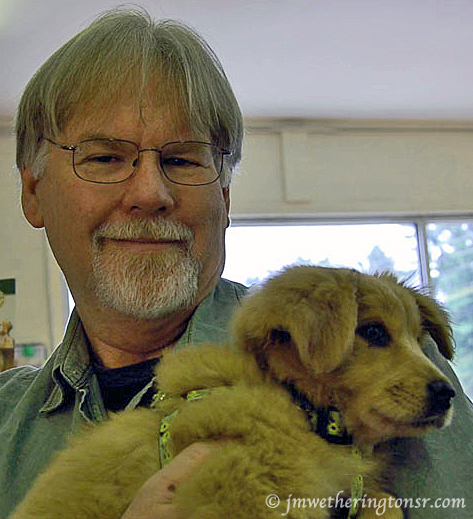 Here’s a photo of Bella and I when we rescued her (or perhaps she rescued us) 4 ½ years ago. When Wolf passed away, I wanted nothing to do with having another dog. The pain of loss was so deep and so complete that I did not want to go through that again. I still don’t. But I was on the road working a lot and Cindy did not want to be at the cabin alone, so I could hardly say “No” when she put it like that.

Where Wolf was high-strung, defensive with everyone but Cindy and I, and perhaps a bit neurotic at times (and we loved him, no matter his quirks) Bella is one of the most easygoing, even-tempered dogs I have ever seen. Yes, she’ll bark at strangers or a noise outside the cabin or house (that is, after all, one reason Cindy wanted a dog at the cabin), but once Cindy or I tell her it’s OK, she settles down. Her sweet nature and cute face just beg you to hug her, and she’ll let you do so without a fuss. She has brought so much happiness and love to us.

So, if you have a dog, give them a little extra treat today in honor of National Dog Day. If you don’t, maybe consider rescuing one if you’re able, or going down to a pet shelter with a donation of some type, or an offer to walk one or two of their dogs. Maybe you can foster a dog or two while they wait to be adopted.

I can guarantee you the love you give will be returned over and over. Happy National Dog Day!