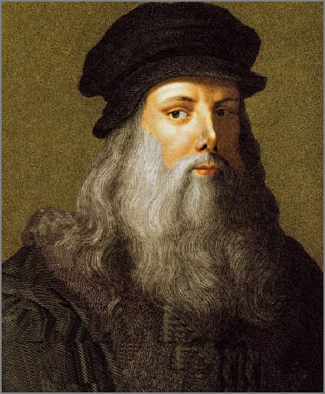 One of the greatest inventive, scientific and artistic minds of all time, Leonardo da Vinci, was born on this date in 1452. When I visited France in 2007, a major highlight of the visit was touring da Vinci’s final home in Clos Lucé near the king’s residence at the royal Château d’Amboise.

Last night my friend Kirk sent me an email about da Vinci that he received from Marc Cenedella, Founder of The Ladders (a self-described “job-matching service for career-driven professionals”) which contains a resume da Vinci sent at age 30 and the translation of the resume. It’s very interesting and I thought I’d share the resume and Cenedella’s email contents with you as well. Cenedella’s words are in blue, while the translation is italicized.

Before he was famous, before he painted the Mona Lisa and the Last Supper, before he invented the helicopter, before he drew the most famous image of man, before he was all of these things, Leonardo da Vinci was an armorer, a weapons guy, a maker of things that go “boom”.

And, like you, he had to put together a resume to get his next gig. So in 1482, at the age of 30, he wrote out a letter and a list of his capabilities and sent it off to Ludovico il Moro, Duke of Milan.

So to celebrate Leonardo’s birthday tomorrow on April 15th, I’d like to share his wonderful resume with you. 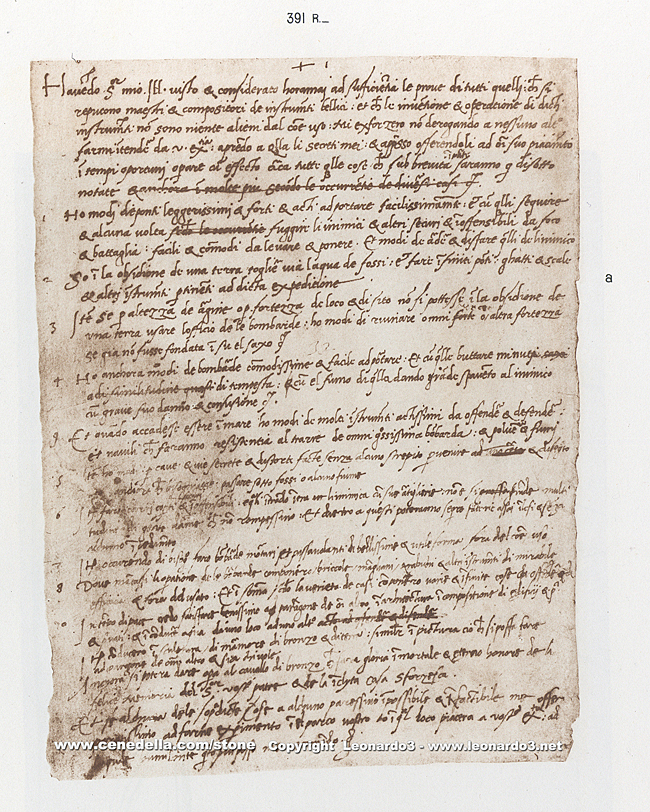 The translation of this letter is quite remarkable:

“Most Illustrious Lord, Having now sufficiently considered the specimens of all those who proclaim themselves skilled contrivers of instruments of war, and that the invention and operation of the said instruments are nothing different from those in common use: I shall endeavor, without prejudice to any one else, to explain myself to your Excellency, showing your Lordship my secret, and then offering them to your best pleasure and approbation to work with effect at opportune moments on all those things which, in part, shall be briefly noted below.

Again, the bronze horse may be taken in hand, which is to be to the immortal glory and eternal honor of the prince your father of happy memory, and of the illustrious house of Sforza.

And if any of the above-named things seem to anyone to be impossible or not feasible, I am most ready to make the experiment in your park, or in whatever place may please your Excellency – to whom I commit myself with the utmost humility, etc.”

What a fantastic piece of personal marketing! There’s none of his famous backwards-mirror writing here – this letter was intended to be read and to persuade.

I’m a hopeless pedantic, so here’s what I think we can learn from Leonardo’s resume:

You’ll notice he doesn’t recite past achievements. He doesn’t mention the painting of the altarpiece for the Chapel of St Bernard; he doesn’t provide a laundry list of past bombs he’s built; he doesn’t cite his prior employment in artist Andrea di Cione’s studio.

No, he does none of these things, because those would be about his achievements, not the Duke’s needs.

Instead, he sells his prospective employer on what Leonardo can do for him.

Now imagine being the Duke of Milan and receiving this magnificent letter from the young prodigy of Florence. The specific descriptives paint a vivid picture of siege engines and bombardments and mortars and trench-draining and bridges to defeat the enemy. You can imagine the scenes that ran through the Duke’s head as he held this letter in his hands and read through Leonardo da Vinci’s bold statements of capabilities.

What Renaissance Duke wouldn’t want “kinds of mortars; most convenient and easy to carry; [that] can fling small stones almost resembling a storm”? Sounds pretty enticing.

And that’s exactly what your resume needs to do, too. Not the laundry list / standard bio that talks about you, but the marketing piece that talks about the benefits to your future employer and how you fit into his or her needs and desires.

So it turns out that even on his 562nd birthday, this remarkable fellow Leonardo da Vinci is teaching us about the future.

What a genius, indeed!