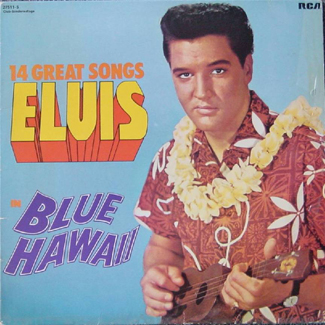 My mother was a huge fan of everything Elvis, so from an early age I grew up with his presence in my life in the form of his music in our home and his movies on TV. I remember buying her the soundtrack LP album from his movie “Blue Hawaii” for her birthday in 1962 (I was only 7 so my dad gave me the money to buy it) and she loved listening to it. Anytime an Elvis movie came to a nearby theater or was showing on TV, my mom would be there to see it. I have no doubt that, if she and Elvis had both lived in this current age of technology and the Internet, she would have had every album on an .mp3 player and every movie in digital format on a tablet. She would have created a fan webpage, a Facebook page and would have tweeted him every chance she got. No doubt.

While there were always some songs of Elvis’ that I liked and a few of his movies that, though simplistic, were amusing, I was never as huge a fan as my mother. Still, when I was managing a drive-thru restaurant in Oklahoma City in 1977, I was saddened to hear of his death on the radio at work. 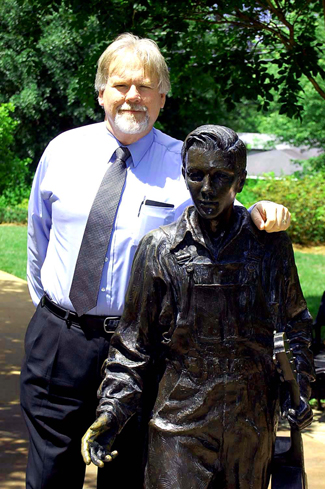 That’s yours truly standing next to the statue of 13 year old Elvis Presley in Tupelo, MS in May of 2010.

I’ve been to Memphis, TN twice but have never visited Graceland, preferring to wait until Cindy and I could visit it together. It’s on our list of places to go one day. But in May of 2010, 3 months after my mom had passed away, I did have the opportunity to visit Elvis’ birthplace in Tupelo, MS. This is where Elvis lived until the age of 13 and you are able to visit the home he lived in and the church where he began singing gospel music. They even erected a statue of Elvis with his likeness at the age of 13. As I walked through the various exhibits and shrines I could not help but wish that mom had been able to be there with me as I toured his birthplace.

But of course, if the stories are true, Elvis could still be with us, somewhere, enjoying a donut and his life of anonymity. If so, here’s to ya’, King! Happy 80th Birthday!!