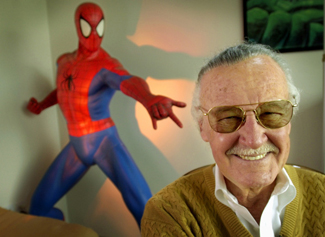 If the name “Stan Lee” means nothing to you, you should probably move on to another post.

I’ve been reading comics that were created, in some form or fashion, by Stan “The Man” Lee since 1961 when the Fantastic Four #1 hit the newsstands. Even before then, really, as I had read some of the monster and western comics put out by Timely/Marvel with Stan as the editor before the resurgence of superhero comics. But I still generally mark my knowledge of his existence with FF #1.

It’s difficult to describe the influence Stan Lee had on me through Marvel comics. Although Superman (who was a character in the competing comic book company of DC Comics) has always been my favorite comic book character, it was Lee’s introduction of characters like Spider-man and Thor or bringing back a character like Captain America that impacted so much of my life, because they all had real, everyday problems in their lives, just like me.

I met Stan Lee once years ago at MegaCon in Orlando, Florida, back when it was still held at the Bob Carr annex downtown and he autographed a few of my comics and graphic novels. His public persona was just as it was in the “Bullpen” pages of Marvel Comic books. Greeting me with “Hello True Believer” and sending me on my way by exclaiming “Excelsior!” as I gathered my signed books and made way for the next fan. I remember thinking at the time that I was glad to have some of his work autographed because he WAS getting on up there in years and might not be around much longer. Now here we are almost 15 years later and thankfully he is still with us.

So, Happy 91st Birthday to the man who made the Marvel Comics Universe, Stan “The Man” Lee! As a bonus, here’s a compilation of all Stan Lee’s cameos in various Marvel comic book movies through the years.