One of the best X-mas gifts anyone ever gave me was a desk calendar containing 365 of Gary Larson’s Far Side comics. I laughed every day of the year thanks to that calendar!

Here’s a little background on the man and his comic strip from The Writer’s Almanac:

It’s the birthday of American cartoonist Gary Larson, the creator of The Far Side, a single-panel comic that ran from 1980 to 1995 and became beloved for its anthropomorphic deer, birds, cats, dogs, dinosaurs, snakes, vipers, and cows, often drawn with cat-eye glasses and beehive hairdos. He grew up in Tacoma, Washington.

After college, he began drawing a comic called Nature’s Way for The Seattle Times. It displayed much of what The Far Side would perfect: a combination of attitude and irony tethered to the craft of comic art. And it had cows. Lots of cows. But it was placed next to a children’s crossword called “Junior Jumbo” and people complained, calling it “incomprehensible.” On vacation from his job as a cruelty investigator for the Humane Society, he drove to San Francisco and dropped his portfolio at the San Francisco Chronicle. They offered him a job, but wanted to change the title. “They could have called it Revenge of the Zucchini People for all I cared,” Larson said. A week later, he was dropped from The Seattle Times and The Far Side was born. Collections of Far Side cartoons have sold more than 45 million copies worldwide.

I know, I have several on my bookshelves at Wolf’s Haven! But this cartoon below has always been my very favorite of all The Far Side cartoons. 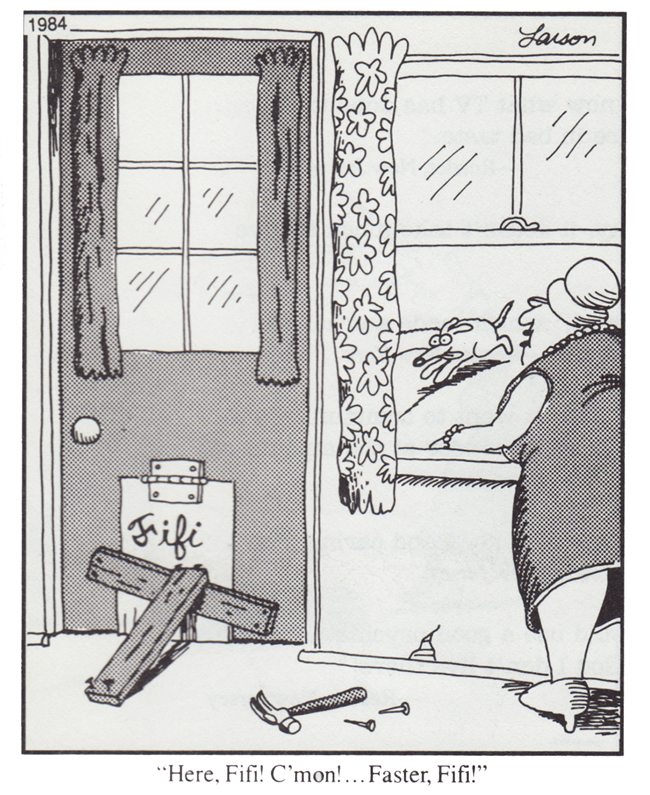 Tags:Gary Larson, Humor, The Far Side