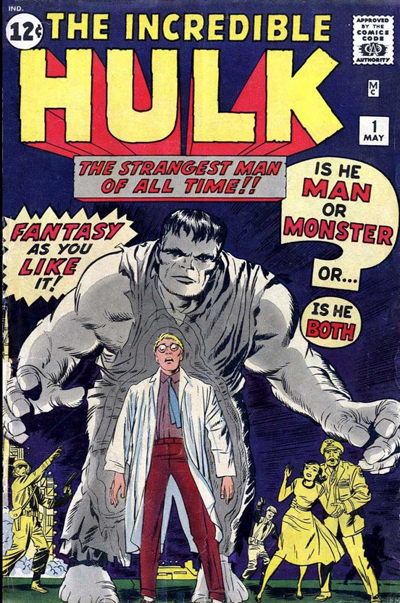 It was 56 years ago this month that The Incredible Hulk #1 hit the newsstands of the day, though cover-dated May, which was the practice in those days. The year before Stan Lee and Jack Kirby had started the Marvel Comics revolution with the publication of Fantastic Four #1, and now they added The Incredible Hulk to the Marvel cast of characters.

Lee and Kirby used “Gamma radiation” around the planet earth to give the Fantastic Four their powers when they rocketed into space, and they used the same radiation to transform mild-mannered Doctor Bruce Banner into The Incredible Hulk when he was caught in a Gamma Bomb blast by accident.

Lee combined the mild-mannered doctor/rampaging beast trope of Dr. Jekyll and Mr. Hyde with the look of Boris Karloff’s Frankenstein. Here’s what he had to say about creating The Incredible Hulk:

“I’ve always had a soft spot in my heart for the Frankenstein monster. No one could ever convince me that he was the bad guy, the villain, or the menace. It was he who was sinned against by those who feared him, by those whose first instinct was to strike out blindly at whatever they couldn’t comprehend. He never wanted to hurt anyone; he merely groped his tortuous way through a second life trying to defend himself, trying to come to terms with those who sought to destroy him.

“I suppose you can guess where we’re heading. Think of the challenge it would be to make a hero out of a monster. We would have a protagonist with superhuman strength, but he wouldn’t be all-wise, all-noble, all-infallible. (How’s that for a rollicking redundancy?) We would use the concept of the Frankenstein monster but update it. Our hero would be a scientist, transformed into a raging behemoth by a nuclear accident. And – since I was willing to borrow from Frankenstein, I decided I might was well borrow from Dr. Jekyll and Mr. Hyde as well – our protagonist would constantly change from his normal identity to his superhuman alter ego and back again.”

You’re probably more used to seeing The Incredible Hulk as the Jade Giant (green) so you may be confused by the gray color of Hulk on this cover. Lee thought that the gray color would result in him appearing “intensely dramatic looking and somber”, but the cheap paper of comic books in those days resulted in coloring inside being “way off from what we wanted.” and so by issue #2 the Hulk became green.

The Incredible Hulk lasted only 6 issues before being canceled. But it returned in 1968 and continued for more than 30 years after that.