Happy 40th Birthday To My Princess

It was 40 years ago today, on a Sunday evening, when Ann Marie Wetherington entered the world. So much has changed during the intervening 4 decades, but one thing that has remained the same is my love for my little girl, my Princess.

Here’s a look back in photos at 40 wondrous years of Ann Marie. 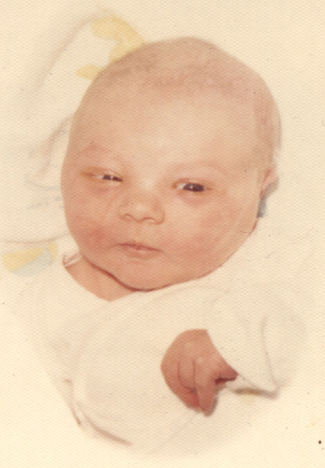 The doctor had to use forceps to help drag Ann into the light of day, and then the brain-dead photographer took a photo right away instead of waiting a bit for the marks to disappear.

I refused to buy their little package of this photo on bracelets, necklaces, coffee cups, pens, pencils, refrigerator magnets and whatever other tchotchke they could think of to slap it on because they did not take a flattering photo of my newborn little girl, so my mother-in-law at the time did. I’m sure she thought less of me for the decision, but I wasn’t about to reward incompetence. 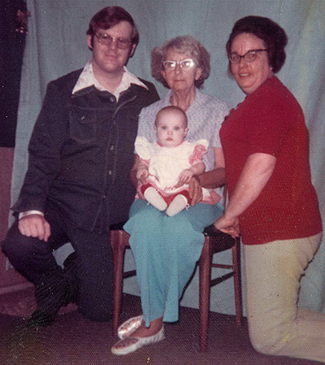 Here’s Ann at 2-3 months of age. That’s me, portraying Leisure Suit Larry on the left, my maternal grandmother (Nana) holding Ann in her lap and my mom on the right. At this point I had just turned 20 in July and Ann already had her dear old dad wrapped around her finger. Nothing has changed in the 40 years since. Both her grandmother and Nana have passed on, Nana in 1999 and Grandma in 2010, but they loved her very much while they were on this earth.

A little collage of Ann between the ages of 3 to 9 months. She doesn’t look it, but she was a handful. Very inquisitive and when she started crawling…look out! 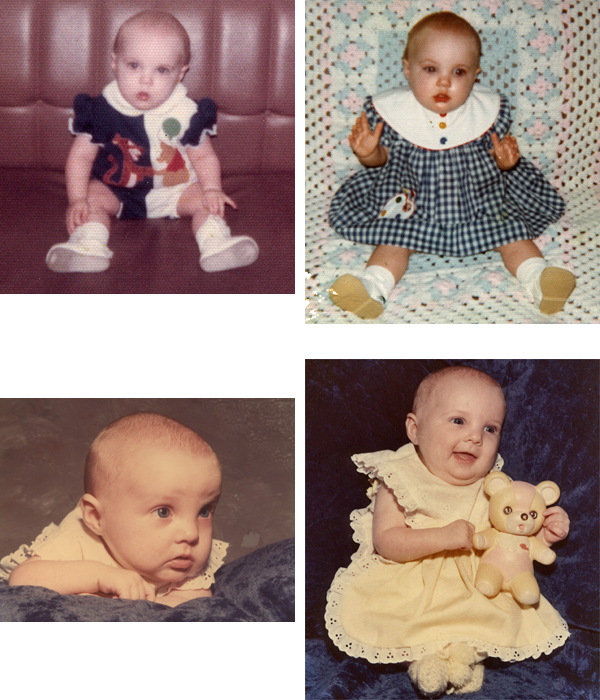 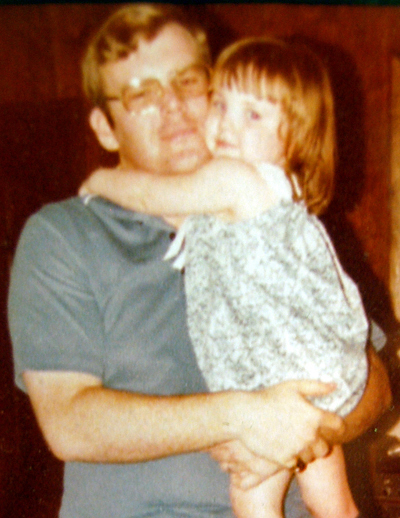 Me holding/hugging Ann when she was about 2 years old. I know I look very serious and maybe even a little uncaring in this photo (it was a look I cultivated over the years because I look goofy when I smile), but the truth was my heart melted inside me every time my little girl wanted to hug daddy. At the time I was going to college in the morning and working a night job. I remember coming home late at night, walking into her room to look at her sweet face as she slept and feeling such a sense of responsibility, but also a feeling of happiness. It made going back into the living room to study into the wee hours of the morning a little bit easier. 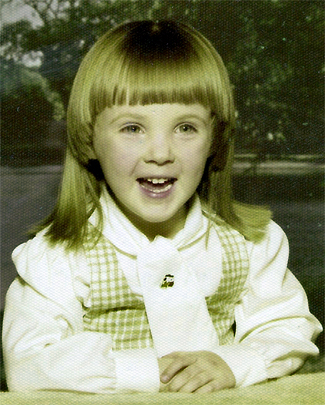 Ann at about 3 years of age. Her laugh and smile were infectious!

Ann is about 4 1/2 and looking so adorable in this dress and hairstyle. 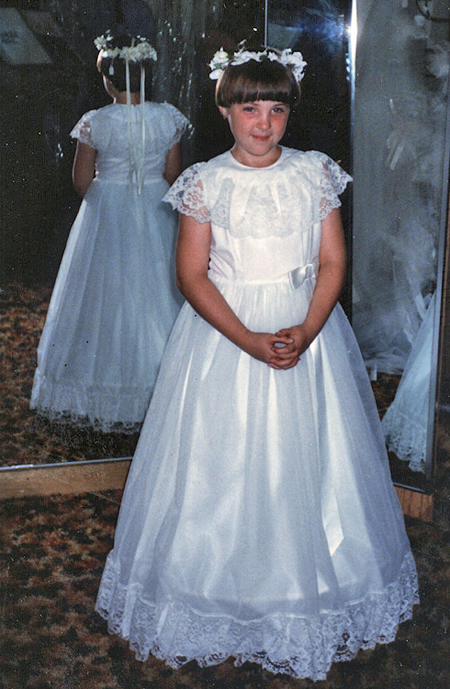 It’s September 1985 and Ann is a little over 10 years old in this photo of her dressed to be in the wedding of her Uncle Mark (my brother) and the woman who would become her aunt (and a saint in my eyes for marrying and staying married to my brother, lol). I remember Ann was so excited to be in the wedding and how happy she was to meet her new cousins. 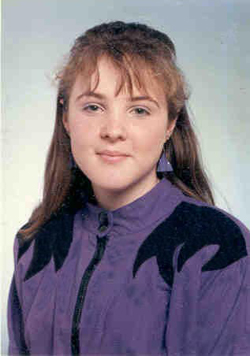 Ann at 14 or 15 I believe. She is growing from a beautiful little girl into an equally beautiful young woman. 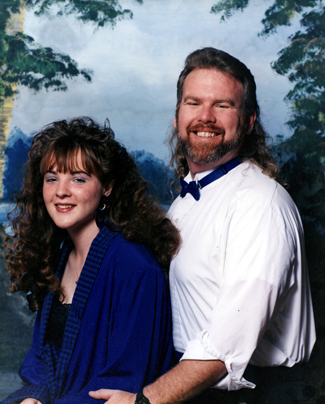 This photo proves what I said earlier about how goofy I look when I smile.

It’s 1991 and Ann is 16 years old. I was working as a bouncer in a bar that required its “security staff” to wear tuxedo shirts and blue bow ties in order to throw drunks and troublemakers out of the bar and beat them up.

The apartment complex where Ann was living with her mother was offering one free photo to all the residents and, in whatever mystical way it happened because dads just are clueless about these things, it was decided that the photo would be Ann and me, with her dressed and made-up to the nines and me in that silly tux shirt and bow tie.

We went down to the clubhouse where the photographer was and we were the only ones there at the time. I don’t know if the photographer thought Ann was older than she was or if he thought that I was some sort of perverted cradle-robber, but he had us sit as you see us here and he starts positioning us. He’s looking through his camera and he says, “Ann, back up closer to Jeff. No closer, make him enjoy it.” I start laughing and Ann says, loudly and indignantly, “That’s my DAD!” The photographer starts apologizing, I’m still chuckling and Ann is still fuming. We finally get past that and this is the photo; Ann looking beautiful and me looking goofy with that smile on my face. 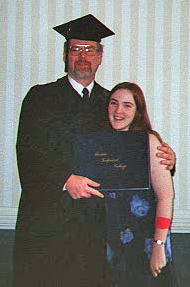 This is me getting another degree in 1997 or 1998, so Ann is 22 or 23. I’m holding the degree in front of her because she had just gotten some kind of tattoo above one of her breasts and the dress showed it, so I’m trying to be funny and keep it from appearing in the photo. 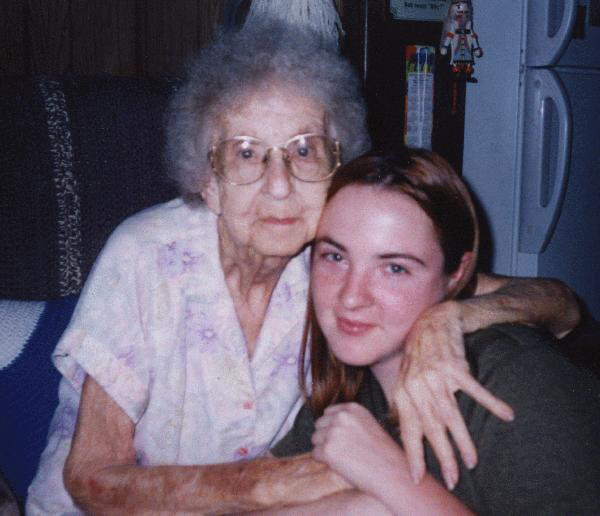 Ann at age 24 with Nana just a couple of months before Nana passed away in 1999. 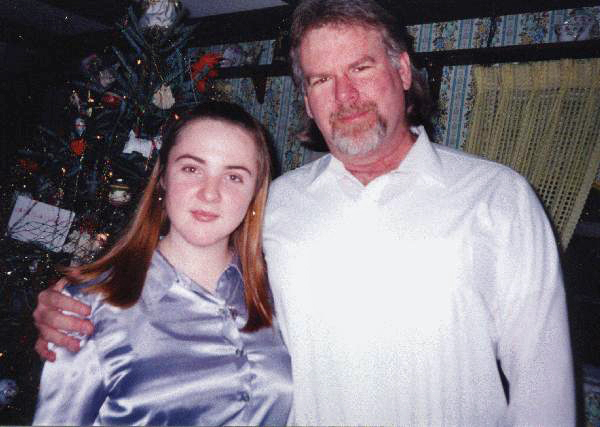 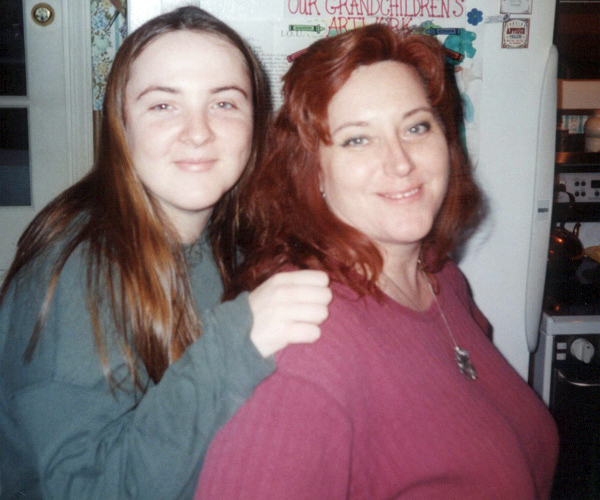 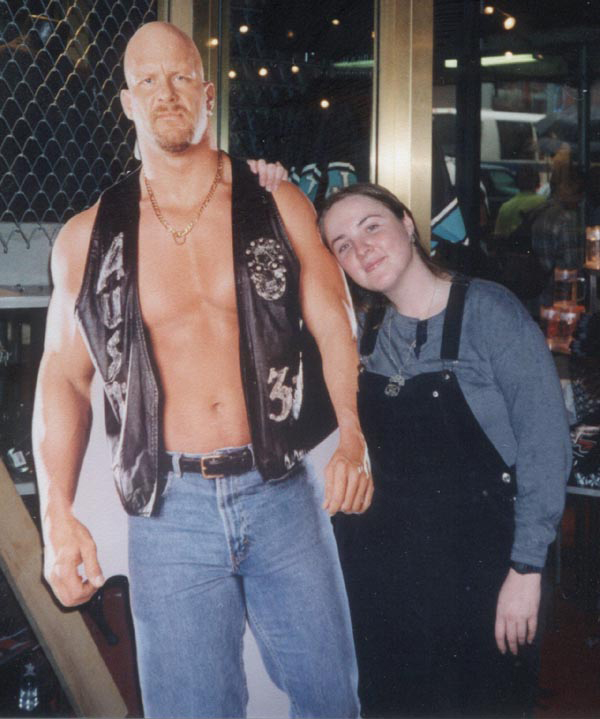 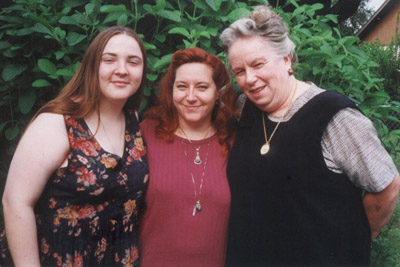 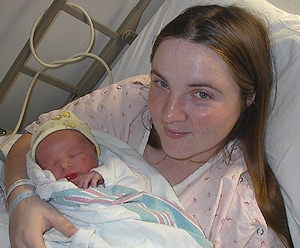 June 11th, 2001, my little girl gives birth to her little boy. It hardly seems possible, but now my daughter is a parent. I remember thinking that at 26 she is probably a little better prepared for her first child than I was at 20. As I’ve watched her parent over the past 14 years, I know she has done a much better job than I ever did. I am always so proud of her. 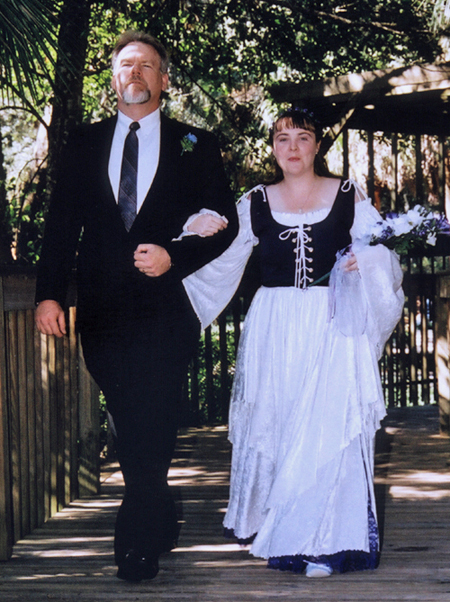 Walking Ann down the aisle at her wedding. 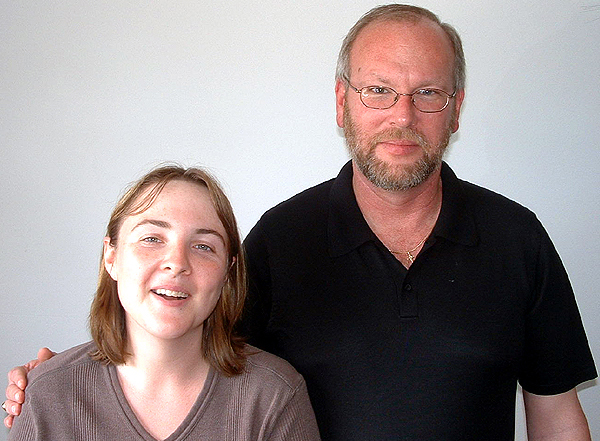 Ann at the age of 29 in 2004 with her Uncle Mark. Or as she called him, “Marky Mark and the Hairclub For Men. Remember, I’m not only the Hair Club President, but I’m also a client.” I don’t know if he’s forgiven her yet for that little bit of humor. 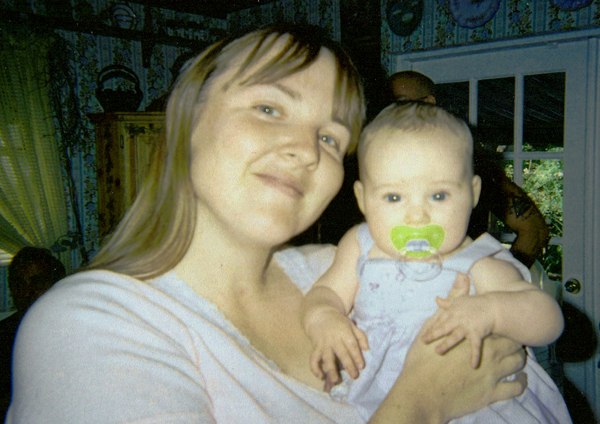 In 2005, at the age of 30, Ann gave birth to her second child and my first granddaughter, Heather Noel. 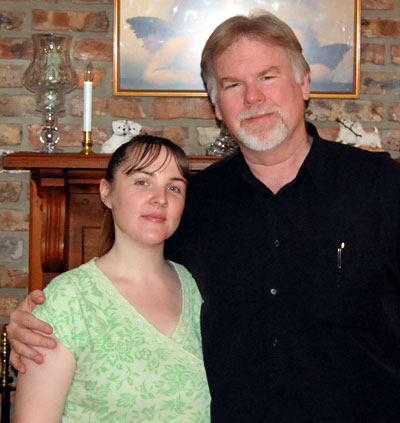 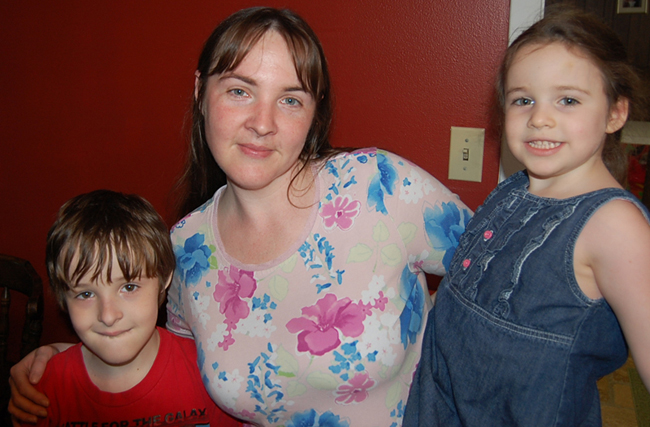 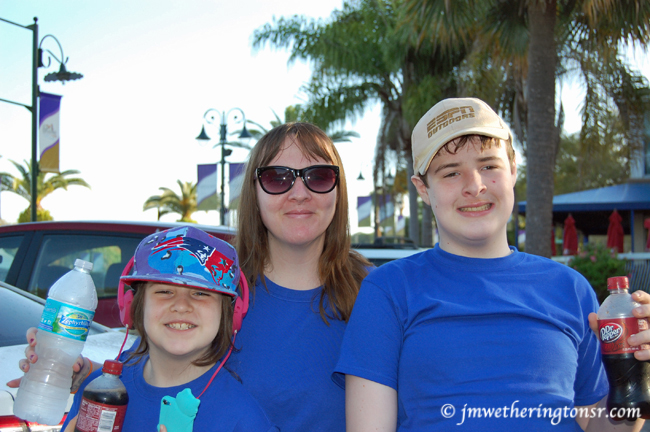 Ann earlier this year and almost 40 at a Parkinson’s Foundation fundraising walk with Mikey and Heather.

Forty years ago tonight I was anxiously awaiting the arrival of my daughter, with no clue what the next 40 years of her life would look like. I mean, I THOUGHT I knew, but at 20 you think you know everything. One day you wake up and realize you knew nothing.

I look at her, even though today she is an adult woman with children of her own, and love her so much because she’s still my little girl. She always will be. I’m grateful for that and for her.  I think sometimes that I could have been a better father when I was younger (they don’t give you a manual, though they should) and I’ve tried to be a better dad the past 20 years, but I’m grateful that despite all my shortcomings she still loves me.

I have no idea what the future holds, but I do know that she will always be my little girl, my Princess.