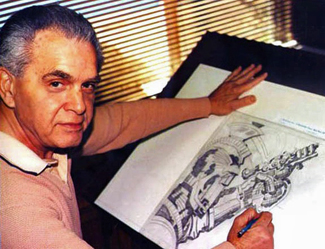 Mark Evanier, who probably knows more about the man outside of his own children and grandchildren, indicates that he will be (hopefully) completing a biography of the late, great, comic book artist and writer, Jack “King” Kirby this year. Kirby passed away 21 years ago next month.

Evanier writes that he has almost 250,000 words so far and that he has so many details of Kirby’s life that, “I’m thinking of publishing it in two editions — one for folks who want to know the details of Jack’s life without hearing what he ate for breakfast on Tuesday, June 12, 1956 and a fuller edition for those who do.”

Count me among those who do. I’ve loved Jack Kirby’s art ever since I first stumbled upon it in the pages of Fantastic Four when I was 8 years old. As I got older I came to also appreciate the massive imagination of the man and the dozens and dozens, if not hundreds, of characters and storylines he created through the years. 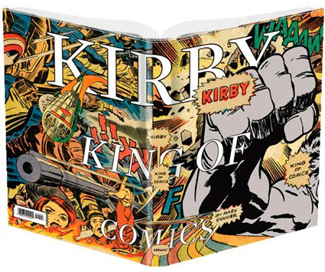 Evanier is also careful to point out that this book will not be a showcase for Kirby’s immense collection of comic book art. “That’s what my first book on Jack was for.” he writes of his “Kirby: King of Comics” book published 7 years ago. I’ve owned that huge, coffee-table sized tome that is 224 pages chock full of Jack Kirby art since it was first published and it occupies a place of honor on my bookshelves in my office at Wolf’s Haven.

I truly do hope that Evanier is able to complete and publish his book during 2015, because it would be great to read his Jack Kirby biography this year.