First Man On The Moon

It was on this date 46 years ago, July 20, 1969, that Neil Armstrong (1930-2012)  became the first man to step foot on the moon. I joined an estimated half a billion people around the world as I watched him take that first step off the lunar module onto the moon’s surface at approximately 11:00 pm EDT, and heard his words, “That’s one small step for a man, one giant leap for mankind” come back from almost a quarter of a million miles away.

He was the first man on the moon. 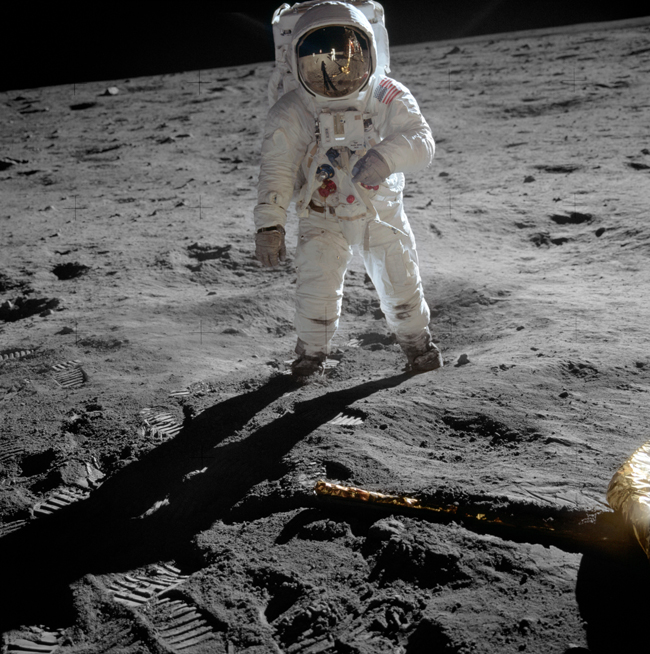 From The Writer’s Almanac:

It was the first manned moon landing. The lunar module, dubbed Eagle, was piloted by Neil Armstrong and Buzz Aldrin. In order to land on the moon, the Eagle detached from the main spacecraft command module (called Columbia and piloted by Michael Collins). As the lunar module approached the moon’s surface, Armstrong noticed that the Eagle was going to overshoot the planned landing site and was headed for a patch of boulders. With only seconds’ worth of fuel remaining, Armstrong steered the landing craft to a better location and brought her down safely. Six hours after touching down, Armstrong stepped off the module’s ladder and became the first earthling to set foot on another celestial body. He had planned his speech carefully: “That’s one small step for a man, one giant leap for mankind.” Because the transmission was cutting out, people thought he said “small step for man,” but he insisted that he said “a man.”

The Eagle left a crater a foot deep in the soft soil, which Armstrong later described as being like powdered charcoal. Armstrong and Aldrin got right to work, gathering soil and rock samples and taking photographs, in case the mission needed to be aborted. They also performed a series of exercises, and found that it was fairly easy to get around on the moon, even though the powdery soil was slippery. The astronauts left behind some scientific equipment, an American flag, and a plaque, which read: “Here men from the planet Earth first set foot upon the moon July 1969 AD. We came in peace for all mankind.”