This issue is cover dated February 1968 which means it was actually released in December 1967, as most comic books were cover dated 2 months in advance of their publication. 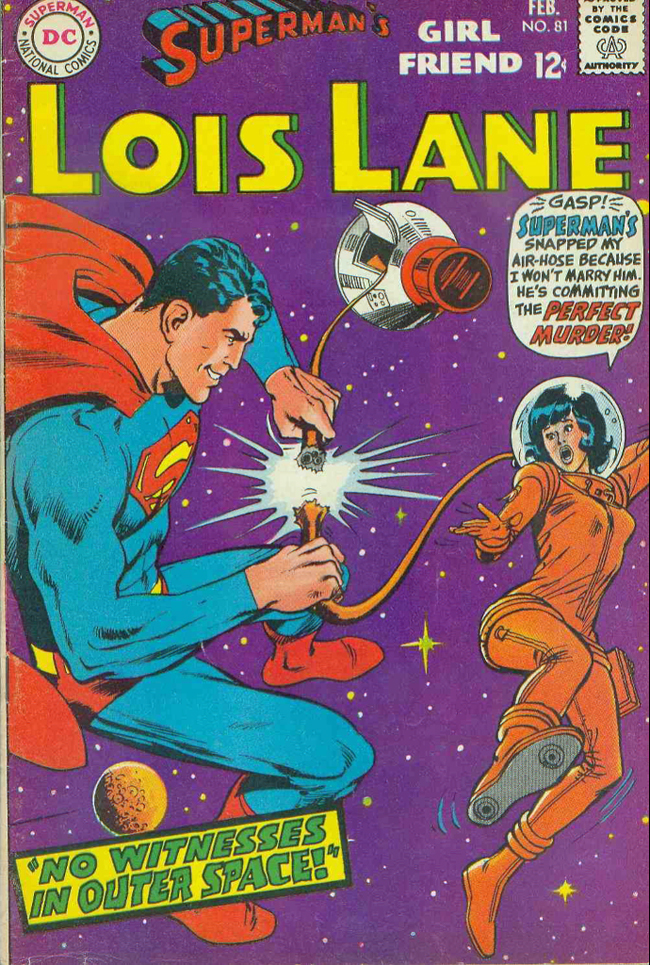 So let’s get the first and most obvious thought out of everyone’s mind; it was NOT the possible death of Lois Lane that attracted me to this cover. That’s a horrible thought and anyone who knows me knows that (even then, at the tender age of 12)  I think too highly of women to follow that line of thinking. Especially since Lois had recently been revamped into a more feminist mindset in the comics, a welcome change from her former “damsel in distress” characterization of the previous decades.

It wasn’t even that the talented Neal Adams was the cover artist for this issue, though that WAS a major drawing (excuse the pun) point for me as I practically idolized the man’s artwork. His more realistic looking illustrations were extremely popular with fans and DC Comics used his work on as many covers as they could to draw (again, excuse the pun) attention to their books on the spinner racks.

What really drew my attention to the cover, even though I would have bought the book anyway because…well Superman, was that it featured an American space program theme. At the time, 1967-1968, NASA was in the forefront of the news with it’s Gemini space vehicles and the race to put a man on the moon before the end of the decade. I was a HUGE fan of the space program and I remember about a year previously answering, “An astronaut” when my doctor asked me what I wanted to be when I grew up, lol. So it was a kick for me to see a Gemini capsule floating in space and Lois Lane (admittedly looking very sexy…hey, I WAS a 12 year old male) in a spacesuit performing a spacewalk tethered by an air hose. Yes, Superman is ripping the hose and seemingly assuring that Lois will die in space, but even as a kid I knew that comic book covers were usually exaggerated in order to entice you to buy, or at least pick up and peruse, the book.