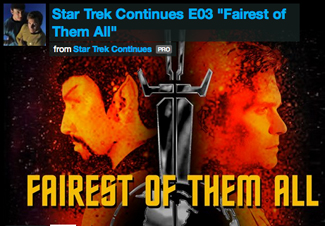 Over the years since the original Star Trek series aired on TV and was adapted to the big screen in several movies, fans have paid homage to the Enterprise characters with stories and fan-made videos, something that has especially exploded in the past decade with the advent of the Internet to spread those efforts.

I’ve been following the work of a particular effort known as “Star Trek Continues” which describes itself as “a fan-produced web series continuing the original mission of the Starship Enterprise.”  They recently released their third episode “Fairest Of Them All’ which follows up on the Original Series episode “Mirror, Mirror” in which the Enterprise discovers an alternate reality where the Enterprise and it’s crew are part of an Empire instead of a Federation and are not as heroic as the crew we know. It is a logical (pardon the Spock reference) extension of what we saw in that first TV series episode and is supported, as are the first 2 Star Trek Continues episodes, by excellent performances of the actors portraying our much-loved characters AND attention to detail of the ship and series itself.

If you enjoyed the Original Star Trek, you might want to give Star Trek Continues a look. Odds are that it will take you back to those days when we used to “Boldly go” out into the universe each week.